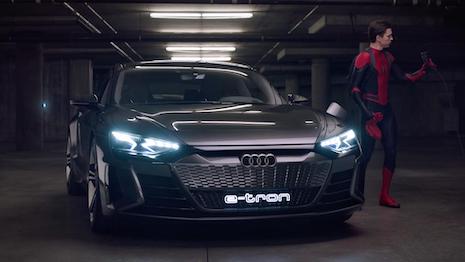 German automaker Audi is continuing its e-tron push through its latest collaboration with Marvel Studios.

Audi and Marvel Studios have a long working relationship, with the most recent efforts centered around a luxury electric vehicle. Ahead of the latest installment of the Spider-Man film franchise, the Audi e-tron appears in a short film alongside actors Tom Holland and Jacob Batalon, who play the roles of Peter Parker and his best friend Ned Leeds.

“We’re always seeking creative storytelling opportunities to share the latest on Audi technology,” said Loren Angelo, vice president of marketing at Audi of America. “Through ‘Spider-Man: Far from Home,’ we are excited to reach the next generation audience while familiarizing them with current and future Audi models.”

Back to school
Audi’s Marvel advertisements are often a mix of humor and Hollywood action, similar to Audi’s overall marketing strategy.

Mr. Holland previously portrayed Peter Parker in Audi’s featurette “Driver’s Test” attempting to get his license. The 2017 superhero film “Spider-Man: Homecoming” was the first time that consumers could see the Audi A8 sedan in action (see story).

Peter and Ned arrive at their school science fair, with the theme of “Electrifying Young Minds.” Their project is a small electric motor, but the confidence drains from their faces when they see all of the other presentations, some of which have both lasers and smoke.

Dejected, Ned turns to leave and avoid the embarrassment of judging. Peter stops him and dials an agent at S.H.I.E.L.D., a fictional law enforcement agency from the Marvel Universe, with an idea.

In a desperate move, Peter asks for the “greatest electric motor of all time” with the code name 2025. This is a reference to Audi’s plan to have its fleet’s carbon footprint reduced by 30 percent between 2015 and 2025 (see story).

Comically, the agent agrees to let him borrow the 2025 in exchange for Spider-Man’s appearance at his son’s birthday party.

In the meantime, dressed in his Spider-Man suit, Peter swings by a secret garage. He enters after punching a code in, revealing a black e-tron sedan.

After dramatically unplugging the e-tron, Peter gets behind the wheel and speeds back to the science fair. He dramatically parks inside the school gymnasium as Ned begins giving their presentation to the judges.

The judges and young boys step inside the e-tron, which Peter pitches as an “example” of the electric motor they built.

However, the boys are not well-versed in the specifications of the e-tron and instead tout the EV’s “touchscreen screens” and “seat heaters.” When the male judge asks about the car’s range, Peter and Ned simultaneously answer “far” and “wide.”

In the end, it is revealed that the judges were not wholly impressed by the electric sports car – or convinced by the boys – and awarded the project second place.

It’s electric
Audi’s e-tron has been the focal point of many recent campaigns, particularly those around blockbuster movies or sporting events, in an effort to introduce its luxury electric vehicles to mainstream audiences.

Taking advantage of the biggest commercial day of the year, Audi showcased its new e-tron concepts during the second quarter of Super Bowl LIII. In true Super Bowl fashion, the spot, titled “Cashew,” focuses on comedy to make an announcement to consumers.

The automaker took the opportunity to announce to Super Bowl viewers that one-third of all of its new models will be electrified by 2025 (see story).

“The Debriefing” begins with a S.H.I.E.L.D. agent bringing Captain Marvel up to speed on “The Avengers” franchise. For the agent’s final update, she shows Captain Marvel how cars have changed as well, revealing an Audi e-tron (see story).

“Partnering with Sony and Marvel provides us with another visual platform to bring electrification to life and highlight the evolution of Audi models with the Audi e-tron SUV and e-tron GT concept,” Audi’s Mr. Angelo said.