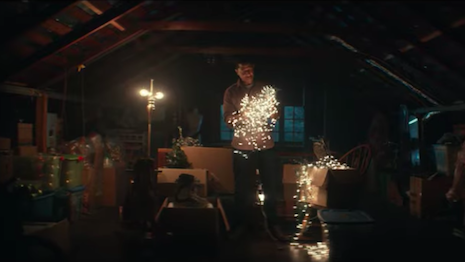 German automaker Audi is taking cues from nature documentaries in holiday spots that create a bond through shared human experiences.

The marque’s Season of Audi sales push centers on commercials that focus on some of the least enjoyable aspects of the holidays, offering Audi vehicles as an alternative to mundane or frustrating tasks. By focusing on relatable experiences, Audi has a chance to connect with consumers on an emotional, empathetic level.

"The holiday season tends to be the most stressful time of the year for many of us and Audi, as seen in previous holiday campaigns, has always infused humor to make light of the idiosyncrasies of our fellow humans during the holidays," said Christos Joannides, founder/creative director of Flat 6 Concepts, Beverly Hills, CA.

"By the same token Audi has always emphasized performance and a sense of an exhilarating 'escape' when you drive their vehicles," he said. "True to form, this campaign echoes previous campaigns of speed, escape and exhilaration."

Mr. Joannides is not affiliated with Audi, but agreed to comment as an industry expert. Audi was reached for comment.

“The Flock” takes place in a dreary airport. A voiceover explains, “ The flock blindly falls into formation,” referring to the lines of people waiting to check in.

These crowds are said to be flying south for the winter, playing off the seasonal migrations that birds take.

Zooming in on one couple, the film shows a young girl knocking her rolling suitcase into the backs of their feet. The man looks over his shoulder disapprovingly at the girl.

The couple’s mood lifts when they hear the sound of an Audi engine outside, as a “more thrilling journey is calling.” Turning around, they give their tickets to the girl and drive off in the Audi.

A second spot, titled “The Moth,” centers on the near universal experience of dealing with tangled strands of twinkle lights.

The short equates a man struggling with cords to a moth caught in a spider’s web. “With every attempt to free itself, it only becomes more entangled,” the voiceover explains.

In the dark confines of the attic, the man becomes increasingly frustrated.

The narrator continues, saying that the “moth” is “unaware than an exhilarating escape is just within reach.”

Offering respite, an Audi’s headlights flood through the window. The man smiles and drops the tangled mess of lights, driving off in the car.

The commercials leave consumers with the tagline, “Defy the laws of human nature.”

These seasonal ads follow a similar format to Audi’s summer sales, which also picked apart near universal uncomfortable or humdrum experiences, with Audi as the antidote (see story).

Comedic effect
Last year, Audi put a modern spin on classic holiday tales, turning them into empowering notions of today that put the spotlight on consumers themselves.

Audi made the holidays about the consumer for its festive campaigns. The theme of 2018's ads was centered on those who earned the Season of Audi Sales Event, by working their hardest all year long for themselves as well as for their loved ones during the holiday season (see story).

The automaker has not shied away from delving into the more humorous aspects of the holidays.

Audi gave its recent holiday campaign a new twist, since even Santa can wish for a special gift underneath a Christmas tree.

"Reinforcing performance and escapism, Audi has over the years become synonymous with those two qualities, resonating with both fans and prospective buyers alike," Mr. Joannides said.

"Using flying creatures such as birds or moths as metaphors for 'flying away' and infusing a little humor not only makes light of the situation but it also reinforces their core message," he said.