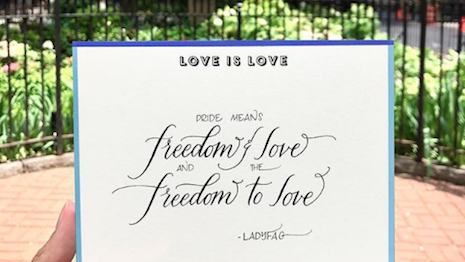 Department store chain Barneys New York’s foundation is exploring the meaning of Pride through the personal stories of LGBT individuals and allies.

Barneys’ #WhatPrideMeanToMe campaign spans window displays, a short film, a social media initiative and a podcast episode that focus on building a conversation around Pride Month. Barneys often prides itself on taking an inclusive, diverse approach to retail, using creative campaigns to communicate its values.

"#WhatPrideMeansToMe is about celebrating the diverse stories of the LGBTQ community and its allies," said Matthew Mazzucca, creative director of Barneys New York. "Not only are we tapping leaders in the community to share what Pride means to them, we also want to engage our community to share their personal stories of Pride."

Barneys kicked off its nationwide campaign with the premiere of a short film featuring 13 individuals who either identify as LGBT or support those who do.

The film is captured documentary-style, as each interviewee is depicted in close-ups sharing their thoughts.

The Stonewall Inn's Stacy Lentz talks about Pride being everyone coming out to celebrate, while nightlife personality Ladyfag talks about it being a moment to reflect on “how far we’ve come.”

What Pride Means To Me

In addition to these personalities, Barneys is inviting consumers to share their own thoughts on Pride for a cause. For each post with the hashtag #WhatPrideMeansToMe, Barneys will donate $5 to The Center, a New York-based organization that provides health, wellness and community support to LGBT individuals.

Barneys will bring the campaign to its stores across the U.S., and its Madison Avenue and Downtown flagships will feature window displays around the theme.

The effort will also span to Barneys’ recently launched podcast series (see story). An episode of the show will feature Mr. Picardi in conversation with Will Higdon-Sudow, senior director of creative services for Barneys New York on topics such as creativity and activism.

As an additional benefit for The Center, Barneys and them. will host an event at Barneys’ Downtown location, which will include a book signing with Simon Doonan, creative ambassador at large for Barneys.

Barneys' campaign will run through June 30.

"We hope that the public, no matter who they are, can connect with the idea of Pride," Mr. Mazzucca said. "We think #WhatPrideMeansToMe will show the diverse community of LGBT people and allies who are celebrating the freedom to live who they are."

Inclusive approach
In honor of Pride Month, luxury brands are showing their support for the LGBT community through charitable initiatives, merchandise and events.

Pride Month is an annual celebration of the impact that lesbian, gay, bisexual and transgender individuals have had on history. Luxury brands are getting involved this year, reaching out with messages of inclusivity and encouragement (see story).

Barneys has previously aligned itself with the fight for transgender equality with an ad campaign and outreach.

The retailer’s “Brothers, Sisters, Sons and Daughters” campaign featured 17 transgender individuals with diverse backgrounds and stories that were told through a series of short films. With this campaign, Barneys showed a more personal, human side to its brand that allowed it to connect on a deeper level with consumers (see story).

"#WhatPrideMeansToMe exemplifies the Barneys DNA," Mr. Mazzucca said. "We were one of the first to support LGBTQ-related causes, and we have continued our commitment to the community over the decades.

"Additionally, the Barneys New York Foundation works with charitable organizations across the country to make an impact in our local communities," he said. "With #WhatPrideMeansToMe, we can reach our followers around the world, while also supporting the LGBT Community Center right here in New York."