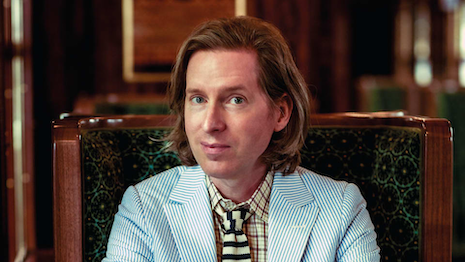 Mr. Anderson collaborated with Belmond to reimagine the British Pullman train’s Cygnus carriage. The result is an artful preservation of art deco details with a modern creative vision, highlighting the filmmaker’s love of trains and passion for craftsmanship.

“This fits beautifully with so many of the unique offerings by Belmond – especially the Cygnus carriage on the British Pullman train.”

A contemporary twist on a classic
According to Belmond, original Cygnus carriage was built in the 1950s and has been featured in several feature-length films, including 1972’s Agatha. The redesign with one of culture’s most notable filmmakers is a fitting example of value alignment, setting the stage for fun expression.

The new Cygnus carriage has been designed with Mr. Anderson’s distinctive and expressive style, with the filmmaker aiming to balance the historical preservation of the carriage with his artful, show-stopping style.

The filmmaker's styling and details are present throughout the reimagined Cygnus.

The carriage resembles one that would fit in one of Mr. Anderson’s films, a bold and modern vision with symmetrical colored-wood selections and bold shapes featuring sunbeams, clouds, stars and waves, with pastel-pink ceiling detailing and a variety of green tones featured in the carpets and chairs.

The relationship between the filmmaker and trains has been long-standing, as rail transportation has been repeatedly featured throughout his films. With his passion for trains and creative expression, the collaboration with Belmond served immensely exciting.

“I have often had the chance to invent train compartments and carriages in my movies,” Mr. Anderson said in a statement.

“So I was very eager to make something new while also participating in the process of preservation which accompanies all the classic Belmond train projects,” he said. “They are keeping something special alive.

“An endangered species of travel which is nevertheless very suited to our time.” 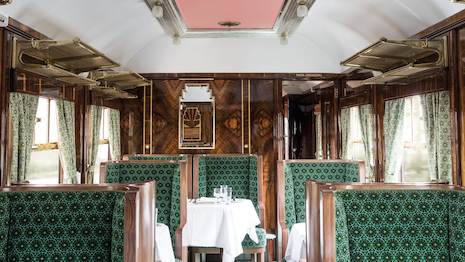 Mr. Anderson’s artistry is present throughout the carriage, from the bright colors to the bold, sharp lines seen in the chairs and mirrors.

Travelers, train lovers and fans of the filmmaker will now be able to dine in luxury, enjoying priority boarding and flowing drinks throughout their bespoke experience on the Cygnus, which will provide table-style seating and two private coupés.

Guests can also reserve the entire carriage for up to 26 travelers.

Belmond highlights
Belmond has had an exciting year, providing affluents with a range of travel activities.

In February, Belmond opened La Samanna, a beachfront hotel located on the French side of St. Martin, amid continued travel restrictions.

The hotel sits upon Baie Longue, one of the island’s longest and most secluded beaches and the site of a pre-Columbian village dating back to 600 BCE. La Samanna’s 83 suites range from deluxe oceanfront rooms with private balconies to private villas with infinity pools (see story).

In May, Belmond celebrated the reopening of its Portofino, Italy property with a vignette capturing the dolce vita.

Belmond’s Splendido Mare Hotel is now open after months of anticipation and a renovation meant to revive the property’s nautical allure. To mark the occasion, Belmond released a montage encouraging travelers “Splendido Mare Together” (see story).

The brand’s recent collaboration with Mr. Anderson is its latest effort in reflecting its adventurous, entertaining ethos built upon providing memorable experiences for affluents.

"As Belmond clearly states, ‘expect luxury, glamor and a dash of adventure,’ which fits the Wes Anderson brand perfectly," Mr. Banks said. “I look forward to seeing how Belmond continues to create unique partnerships such as this one.”