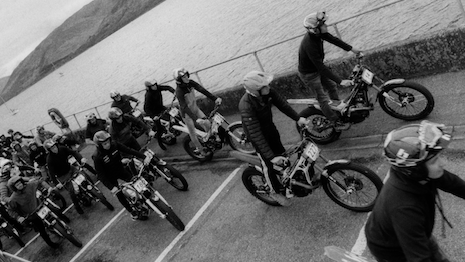 British fashion label Belstaff is combining style, tradition and tenacity through the newest installment of its Old is Good campaign, an examination of the Scottish Six Days Trial.

A historic, internationally recognized off-road motorcycle competition that has been running since the early 20th century, the Scottish Six Days trial invites extreme motorcyclists to take on hundreds of miles of the Scottish Highlands. In its newest film, which was captured on location during this year’s May event, Belstaff explores the idea of “true grit” as a lesson in both physical and mental agility and lasting style.

“We are here to spotlight the local heroes, global talents and local community that show up here, year after year,” said Jodie Harrison, global brand director at Belstaff, in a statement. “This is a completely unique event that has been taking place since 1909 and very little has changed in terms of the terrain the riders endure.

“We’re here to support the riders from the sidelines.”

Lesson in grit
According to Belstaff, the competition is not a test of speed, but rather agility and endurance as 275 riders bike up to 100 miles per day along the moorlands and rocky terrain of the Scottish Highlands in Lochaber.

The campaign intends to pay tribute to “true” motorcycling, as well as the community of riders, officials, fans and volunteers whose shared spirit continues to power the off-roading event.

Shot and directed by Samuel Bradley, the narrative was captured completely on a 1977 Canon Scoopic 16MS and features riders traversing the natural landscapes of Scotland in sponsored performance apparel.

Among the riders featured in the campaign is Alfie Lampkin, son of 13-time Scottish Six Days Trial champion Dougie Lampkin.

Various riders — young and old, men and women — are filmed taking portraits on their bikes wearing Belstaff gear. A sea of motorbikes and eager spectators illustrate how beloved this event is and how many people come to partake.

Some riders emerge atop rocky hills with ease, while others fall to the challenge.

Belstaff shows clips of riders with the front wheels nearly 90 degrees from the ground, reiterating that this event is not for the weak of mind and body.

The brand has been dressing riders since 1929, and this year was no different. Belstaff provided riders and race personnel pieces from its latest collection as well as other items from its archives for the series of documentary-style portraits.

Launched in 1948 and designed to allow for ease of movement on a bike, Belstaff’s Trialmaster Jacket is made from water- and wind-repellent wax. Details of the jacket include a four-pocket silhouette with a slanted map pocket, curved arm construction for mobility and an adjustable throat latch collar and waist belt.

Belstaff motorcycle’s Trialmaster is fully certified as Motorcycle PPE. It retails for 575 pounds, or $720.40 at current exchange rates.

The “Scottish Six Days Trial” campaign is part of Belstaff’s larger “Old is Good” series, which honors well-loved and vintage pieces as well as new items constructed to last over time.

Inspired by motion
With its own performance brand, Belstaff Motorcycle, the British label has had a longstanding relationship with the motor world.

Last year, the brand hit the road with an adventurous duo in a film that showcases how the brand balances exploration and durability. In the campaign, Belstaff followed brothers Ross and Hugo Turner, better known as the Turner Twins, on a motorcycle journey along the Scottish coast.

Aiming to conquer the North Coast 500, described by Belstaff as “Scotland’s answer to Route 66,” the highway that once traversed the United States, the Turner Twins upped the challenge by riding in December with limited daylight (see story).

In 2018, Belstaff joined forces with British automaker McLaren to translate the marque’s focus on mobility into clothing.

Marking the first collaboration between the two brands, the capsule collection featured outerwear and suiting designed for drivers’ comfort both in and out of the car. While operating in different categories, both companies share the values of helping consumers in motion (see story).