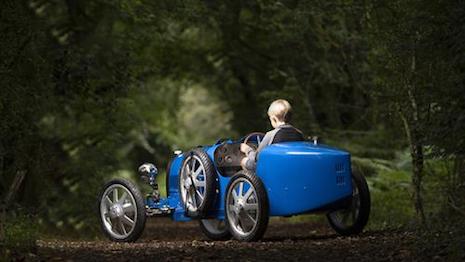 The Bugatti Baby II is a three-quarter-scale replica of the Type 35. Image courtesy of Bugatti

French automaker Bugatti is hearkening back to its heritage during its 110-year anniversary with a modernized remake of its scaled-down Type 35.

The Bugatti Baby II is based on a half-size Type 35 that Ettore Bugatti made for his 4-year-old son Roland in 1926. Bugatti’s contemporary car has been updated to fit both adults and children, allowing Bugatti to reach enthusiasts of all ages.

"This model seems to be of a size or scale that will fit both children and adults," said Ron Kurtz, president of the American Affluence Research Center, Atlanta. "It might attract the aspirational Bugatti buyer but is more likely to appeal to Bugatti owners for their children and others who are collectors of such unique products."

Mr. Kurtz is not affiliated with Bugatti, but agreed to comment as an industry expert. Bugatti was reached for comment.

Bringing back the Baby
After debuting a 3D model of the Bugatti Baby II at the Geneva Motor Show earlier this year, Bugatti is now sharing the prototype for the upcoming car.

Leading up to the release, Bugatti shared a video series that traced the history of the small-scale model.

The original Bugatti Baby was constructed by Mr. Bugatti and his son Jean for Roland. In addition to the first, just 500 were made for Bugatti clients.

In a video, Charles Trevelyan, the chairman of Bugatti Owners’ Club, said that only about 150 of the original Bugatti Baby cars are still around.

The history of the Bugatti Baby

Bugatti worked with The Little Car Company to bring the new Baby to life. The car is a three-quarters replica of the original Type 35, and is about 9 feet long and 3 feet wide.

This time around, the engineers were able to leverage modern technology to scale down the car. First, they scanned the components of a 1924 Type 35 Lyon Grand Prix vehicle.

The Baby II has gotten a few modern changes. The car features an electric powertrain with two sizes of removable batteries: a 1.4 kWh pack and a 2.8 kWh pack, the latter of which is expected to give a range of more than 18 miles.

Reflecting this electric update in the cockpit, the dashboard has swapped out the historic tachometer with oil and fuel pressure gauges for a speedometer, battery level indicator and power gauge. However, Bugatti has kept the race clock from the original. 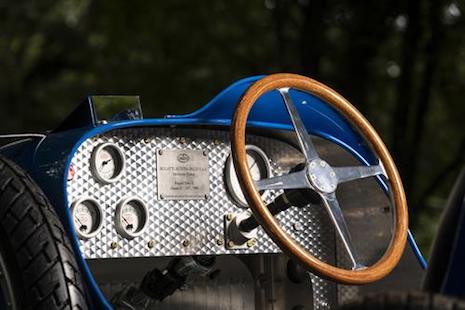 The Bugatti Baby's dashboard has been given an update. Image courtesy of Bugatti

Another update has been made to the wheels. The eight-spoke alloy wheels were replicated, but given Michelin tires.

The cars have a horn, headlights, emergency brake and rearview mirror, giving an authentic driving experience to even the youngest drivers.

Since the Bugatti Baby II is designed for both kids and adults, its has two power options that give different max speeds. In child mode, the car can only reach top speeds of about 12mph, while adults can reach up to 28mph.

For some versions, the car will come with a key that takes away the speed limit, boosting the power to 10kW compared to just 4kW for the adult mode.

As an added safety precaution, the car has a remote control that can stop the car from a distance of about 164 feet.

Adding a bespoke touch, the Baby IIs can be painted in other shades than the standard French racing blue, with a vintage color selection that refers back to Bugatti’s history. 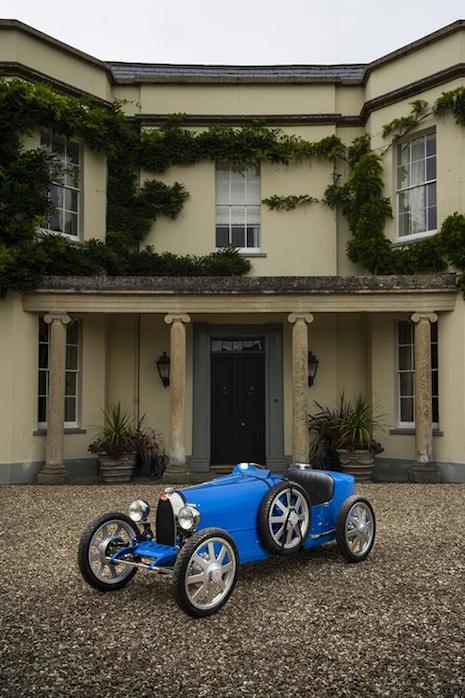 The Bugatti Baby IIs have a starting price of 30,000 euros, or about $33,000, before taxes. After the announcement in March, Bugatti sold all of the 500 cars within weeks, but it has opened a waiting list in case a buyer drops out.

Production of the Bugatti Baby will begin in 2020.

"A limited run is essential to assure limited availability and exclusivity," Mr. Kurtz said. "That will be important to collectors and to avoid the potential embarrassment of not selling a larger full run.

"Even with a larger run, the potential sales and profit of this product would be relatively unimportant to the financial results of Bugatti," he said.

Anniversary celebration
Beyond the Baby, Bugatti has made creative models, including those aimed at differentiated driving rather than reaching super speeds.

The brand recently invited fans to get up close and personal with one of its most unique models.

Visitors of the Canadian International Auto Show were able to witness Bugatti’s North American debut of its extremely unique design. The first-ever life-sized Lego Chiron was on-site at the show, where visitors could experience the build themselves, getting a glimpse at the inside with intricate replicas of details of the Chiron, as well as its exterior (see story).

While the Baby II is priced at five figures, Bugatti also celebrated its 110th anniversary with a record-breaking hyper car created specially for a brand enthusiast.

The one-of-a-kind Bugatti La Voiture Noire was sold for 11 million euros, or about $12.4 million at current exchange, before taxes. While the record for a car sale is held by a $48 million Ferrari 250 GTO from 1962, Bugatti’s car became the most expensive new car of all time (see story).

As Bugatti celebrates the milestone, the Bugatti Baby II is an opportunity for the brand to engage more fans, while also drawing attention to itself through corresponding digital content.

"A 110th anniversary is not the typical milestone that is usually observed in 25-year increments," Mr. Kurtz said. "Normally it would not generate a lot of attention and interest, but this promotion gives Bugatti content for social media and a magnet for media publicity."