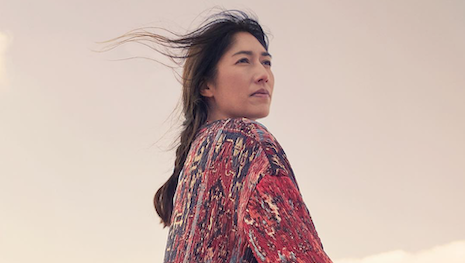 French fashion label Chloé is exploring ambition and curiosity in the latest effort around its Nomade fragrance.

Chloé is leveraging social video for its new series, “Nomad Stories.” In the same manner as other Chloé efforts, the Nomad Stories campaign emphasizes free spirits and female friendships.

“Chloé knows how to balance the feminine with the avant garde,” said Lauren Bates, marketing manager and lead storyteller at Blue Moon Digital, Denver, CO. “The avant garde in this fragrance campaign is the women.”

Ms. Bates is not affiliated with Chloé, but agreed to comment as an industry expert. Chloé was reached for comment.

Modern nomads
Episodes of Nomad Stories are now available on Instagram and IGTV. Each runs about a minute long and introduces fans to its newest #chloeGIRLS, women from different walks of life.

The video style is intimate, with voiceovers by the women and several close-ups. Reflecting the default style of IGTV, each short is filmed in a vertical orientation.

“IGTV is a great way for brands to connect with their audience through a moment,” Ms. Bates said. “IGTV has a longevity about it – it allows brands to create high-quality branded content without losing out on the ‘in the moment, conversational’ nature of social media.”

Introducing @MarineTanguyArt, an entrepreneur who features in Nomad Stories, a series that showcases #chloeGIRLS encountering the world. When she isn’t traveling to meet artists, Marine can be found in London overseeing MTArt Agency, which she founded in 2015. Marine develops the careers of emerging, international artists by exposing their talents as a wider cultural exchange #chloeNOMADE

Entrepreneur Marine Tanguy appears in the first Nomad Stories video. She travels the world to meet artists she works with for MTArt, a visual artist agency based in London.

“I have always valued freedom over safety,” Ms. Tanguy says in the episode, speaking about her professional travels.

“What’s incredible is that different settings change aspects of your character,” she continues. “Over the years, you become a melting pot of all the cultures you have encountered.”

In the episode, Ms. Tanguy introduces Adelaide Damoah, a Ghanian artist she works with. The entrepreneur also speaks about what personality traits she has embraced during her career.

Set in Instabul, the second Nomad Stories stars Marion Verboom. The visual artist speaks about the different inspirations behind her work, such as colors.

“What interests me is to be able to create analogies between different cultures and different eras,” Ms. Verboom says in the video.

Adventurer Linda Bortoletto appears in the third short, discussing her travels through Siberia, the Himalayas and the Negev desert. Ms. Bortoletto left a job in France’s Ministry of Finance to explore the globe.

“When you take the risk of traveling by yourself, you’re never really lonely,” Ms. Bortoletto says.

In a similar manner as Ms. Tanguy, Ms. Verboom and Ms. Bortoletto both speak about other women they have come across during their experiences and the importance of those friendships.

Exploring themes
Chloé launched its Nomade fragrance last year, which is meant to capture freedom in a perfume bottle.

Developed with the help of licensee Coty, Inc., Nomade has notes of oak moss, mirabelle plum and freesia to create a “the feeling of escape”

For the bottle, Chloé drew inspiration from the popular Drew handbag style, sharing the purse’s O-shaped curves. The glass is a rosy beige, allowing light to filter through, while the cap is sealed with a flowy pink ribbon and knot (see story).

An earlier Nomade effort took the fragrance on the road in a travel-themed advertising campaign.

“Especially with fragrance campaigns, there is a seduction piece or a fantasy element,” Blue Moon Digital’s Ms. Bates said. “Women want a different story – they want to be inspired by other women, to connect with them.

“The brand is showing that they can connect on a level outside of an aesthetic or an image,” she said. “A woman who wears Chloé is just as likely to show up at an art exhibition opening as she is to bike through Siberia.”