French fashion house Christian Dior is launching its newest fragrance with the help of one of the brand's most relatable celebrity ambassadors.

Joy by Dior, the label's first fragrance launch in almost two decades, is meant to appeal to younger women who have yet to embrace luxury scents. Actress Jennifer Lawrence, who is known for her down-to-Earth personality and award-winning film career, stars in the Joy campaign.

"Joy is aimed at millennials who are not as inclined to use fragrances as past generations," said Jim Gentleman, chief strategy officer at SKG, Las Vegas. "The choice of Jennifer Lawrence as the face of Joy helps introduce a new audience to Dior well familiar and fond of her.

Mr. Gentleman is not affiliated with Dior, but agreed to comment as an industry expert. Dior was reached for comment.

Spontaneously, the actress dives into the pool, fully-clothed with the tulle skirt gracefully flowing behind her in the water. Scenes of the actress swimming underwater alternate with shots of her lounging by the pool in the white vintage-inspired bodysuit and nude high heels.

Looking very much like a classic Hollywood star, the actress wears her hair short to highlight the Rose Dior Bagatelle necklace around her neck. Completing Ms. Lawerence's retro look is subdued eye makeup complimented with lipstick that alternates between a bold matte red and a shimmery pink nude.

In a moment of magical realism, Ms. Lawrence swims underwater with glowing jellyfish and later, a mysterious lover. She also shoots water from her mouth towards the camera and floats in the pool, taking in the starry night. 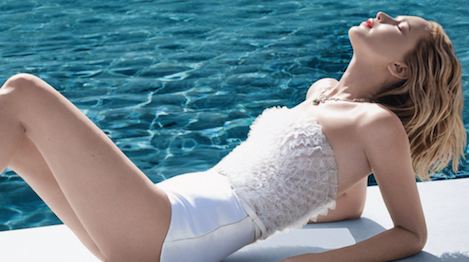 Instead of opting for a whimsical soundtrack, the Joy campaign added an element of cool by incorporating the Rolling Stone's "She's a Rainbow."

The film's fresh color palette of bright blue and white reflect Joy's clean scent, which has notes of citrus, white florals, rose and musk. The perfume bottle itself is pink glass with a jeweled cap, mirroring Ms. Lawrence's pink gloss and diamond necklace.

"The ad campaign for Joy is an ode to high-fashion itself with its combination of A-list superstar Jennifer Lawrence, a music track from the Rolling Stones and a glamorous setting in the Hollywood Hills," Mr. Gentleman said. "It feels elegant, timeless and rich — all true to the Dior brand.”

Dior first announced Ms. Lawrence as the spokeswoman for its new women’s perfume earlier this summer, building on a long-standing relationship between the two. She joins other notable celebrities such as Natalie Portman and Charlize Theron, who are also Parfums Christian Dior spokesmodels.

Most recently, Ms. Lawrence was the face of Dior’s 2018 cruise campaign and this year's ready-to-wear collection (see story).

The fashion house also built on its relationship with Ms. Portman as the personification of the fragrance Miss Dior with a spot that viewed more as a music video combined with a film trailer rather than a perfume ad.

Ms. Portman took her place as Miss Dior yet again, but flexed her film muscles a little more. The spot asks viewers, “And you, what would you do for love?” while constructing a narrative meant to put the focus on a fiery love affair (see story).

“Dior associates with distinctive personalities and celebrities to reflect the diverse and unique attributes of its various brands," Mr. Gentleman said. "All of the 'faces of Dior,' however, share a common bond of beauty, excellence, strength and independence.”