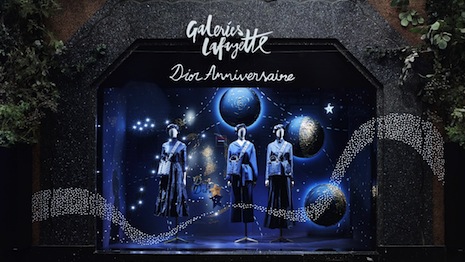 French fashion house Christian Dior is spreading the celebration of its milestone 70th anniversary to other established brands in the luxury industry with bricks-and-mortar initiatives.

Department store Galeries Lafayette is another luxury brand to help usher in Dior’s anniversary with a tangible experience that will make a lasting impression. The French retailer will feature limited-edition products that represent the brand’s legacy.

"Milestone anniversaries are important in the luxury sector, particularly when it comes to fashion," said Taylor Rains, managing partner at Flugel Consulting. Heritage and craftsmanship are major building blocks of a legacy luxury brand, and when a company is able to leverage both equally it is of huge benefit.

"With this anniversary event, Dior is quite literally showcasing both of these tenants of luxury with its window displays and "I Feel Blue" exhibition," he said. "On the other side, Galeries Lafayette benefits by playing host to exclusive items - a major differentiator in the brick-and-mortar retail market."

Dior celebration
The designer is currently occupying more than 11 windows at Galeries Lafayette's flagship store in Paris. The display will run until Oct. 10 and will sell 23 exclusive items to celebrate the anniversary of when Dior's namesake designer showcased his first couture collection in 1947. 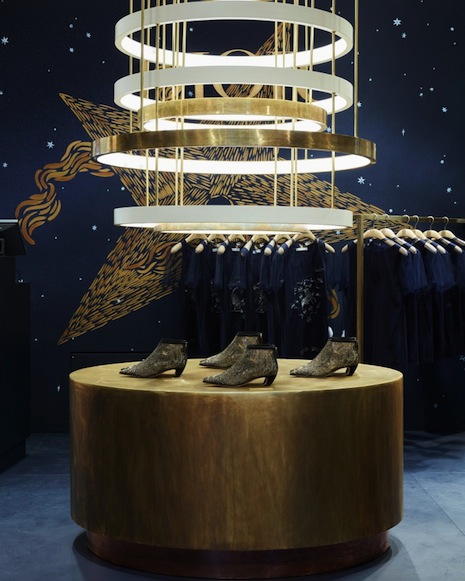 Exclusive products sold only with Garlies Lafayette include special Lady Dior bags embroidered with the words, “I Feel Blue,” representing the designer’s “I Feel Blue” collection.

A blue scarf will also be available featuring stars and the words, ““Les 70 ans de Christian Dior,” which translates to “The 70th Anniversary of Christian Dior.”

The windows feature 12 blue silhouettes, keeping with the theme of I Feel Blue. The designs, which includes the Doris woolen coat, were created by Mr. Dior and taken from the designer’s archives. 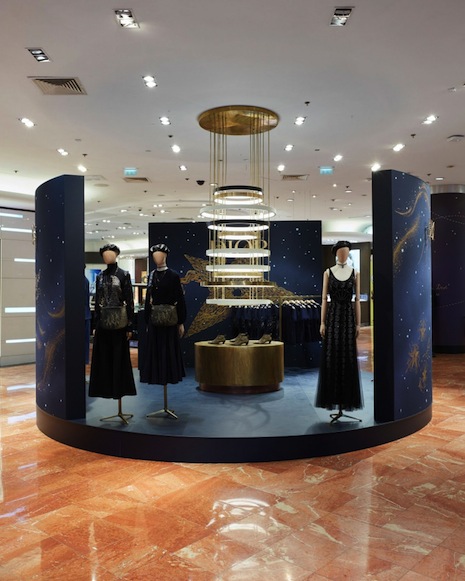 A collection of 12 original vintage Dior products of which Mr. Dior himself worked on will be showcased in the Galeries Lafayette exhibition space. The collection ends with a 1957 rose-embroidered Billet Doux silk day dress, which was created the year Mr. Dior died.

Anniversary celebration
Dior has created a series of celebrations for its milestone anniversary.

The French couture house looked back on seven decades worth of design in a retrospective at the National Gallery of Victoria in Melbourne.

“The House of Dior: Seventy Years of Haute Couture,” opened Aug. 27, features the work of all seven of Dior’s head designers over the years, from the eponymous founder’s New Look collection from 1947 to the first couture line from current creative director Maria Grazia Chiuri. This exhibit celebrates not only the milestone for the brand, but also the longstanding relationship between Dior and Australia (see more).

Dior also celebrated the anniversary of its founding with the largest exhibit seen at the Les Arts Décoratifs in Paris.

“Christian Dior, Couturier du Rêve” will be a retrospective of its founder and its couturiers, displaying more than 300 dresses and accompanying photographs. The exhibit will run from July 5 to Jan. 7 of next year, which coincided with the opening with Paris Couture Week (see more).

"A partnership between a brand and iconic retailer is not a unique concept in and of itself," Mr. Rains said. "The way Dior has chosen to execute this partnership, however, is different than what we typically see.

"The brand has chosen three distinct elements as part of the execution, each with an independent objective yet all in service of the greater brand goal: display windows to capture mass interest, an exhibition to articulate and celebrate the history of the brand, and an exclusive product offering to engage customers and drive foot traffic," he said.