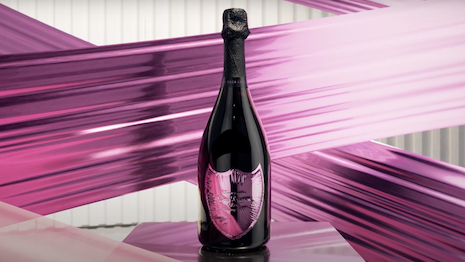 LVMH-owned Champagne house Dom Pérignon is rolling out a new release under its partnership with actress and singer Lady Gaga.

The star continues a creative dialogue with the vintage producer, designing a new bottle for the bubbly drop. Live as of Oct. 1, Dom Pérignon Rosé Vintage 2008 Lady Gaga Limited Edition is now available for purchase.

Dom Pérignon x Lady Gaga
Hosted by Dom Pérignon, the doors to Lady Gaga's Queendom have been opened once more.

A 2021 launch signified the start of a collaborative effort that would span two years (see story). As promised, the Champagne house is back with yet again, with another iteration of its ongoing limited edition series with the star.

Over the weekend, Dom Pérignon posted a trio of ad spots on Instagram in celebration of the joint feat.

Infused with values of self-expansion and accompanied by a bold design, campaign videos feature an ethereal soundtrack and strips of rose ribbon.

Creative tension is on display by way of a refreshed label, which appears to have been pulled taut around its border. This pull is where Ms. Gaga suggests true harmony is to be discovered.

Though its latest venture, Dom Pérignon's current rosé vintage 2008 is not its sole engagement with the star.

Released in April of last year, the collaboration's debut campaign video show the expressive Academy Award-winning songwriter in a multitude of exuberant pink and red ensembles set to “Free Woman” from her 2020 album Chromatica (see story).

The singer expressed excitement concerning the partnership at its origin.

“Dom Pérignon and I are both driven by the need for creative freedom, and we’re excited to share the Queendom with you," Lady Gaga said, on Instagram (see story).