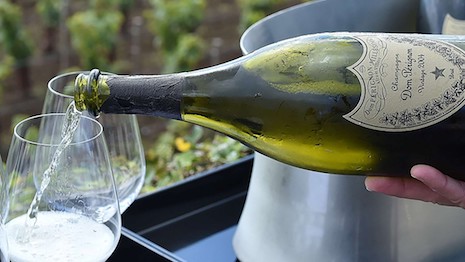 Dom Pérignon is putting its Champagnes in consumers' hands in an hour. Image credit: Dom Pérignon

Together with third-party technology firm Thirstie, the Champagne house is launching an ecommerce option on its Web site in select United States markets, promising to put bottles of its vintages in customers’ hands in an hour. With consumers becoming more accustomed to instant gratification, retail in a number of categories is catching on with faster fulfillment.

“It was very important to us to be strategic in choosing a partner to introduce this direct on-demand service,” said Devaraj Southworth, CEO of Thirstie, New York. “We felt that Dom Pérignon, and Moët Hennessy as a whole, share the same values as Thirstie and same commitment to providing personalized luxury experiences.”

Dom Pérignon’s Thirstie ordering platform will be available first in New York and Miami. Consumers can start their order from the brand’s Web site, picking from popular bottles such as a 2006 vintage or the P2 from 1998. 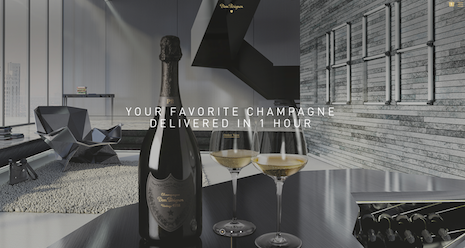 Selecting a “shop now” button takes consumers to an ecommerce platform powered by Thirstie. The orders are fulfilled by local retailers on the Thirstie network.

Deliveries will be made with bottles that are ready to taste.

"A continuation of the Moët Hennessy USA ambition of innovation in the market, the launch of a one-hour luxury delivery service for Dom Pérignon presents a new avenue in which to delight the Dom Pérignon consumer, in the on-demand and immediate world they live in," said Jorge Cosano, vice president of Dom Pérignon, in a statement.

"We are continuously looking to find new ways to further drive innovation and deliver on our commitment to building luxury brands with a strong consumer focus and to create new opportunities to strengthen our partnership with our retail customers," he said. 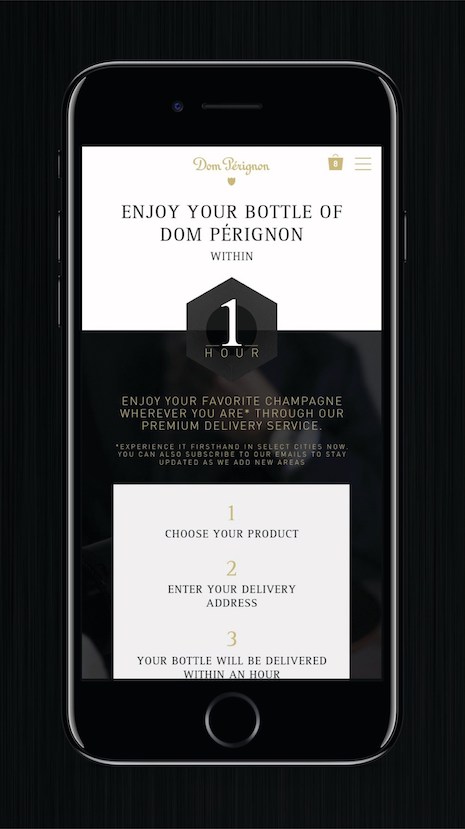 The U.S. has a three-tier distribution system for alcoholic beverages, preventing producers such as Champagne houses from selling their own products. Instead, spirits makers have to link with separate distributors and retailers.

While the Dom Pérignon transactions are handled by Thirstie, which is an independent company, the addition of this ecommerce experience to the Champagne brand’s site can help it connect its branded universe and inspiration with a path to purchase.

“Since the rise of ecommerce we have noticed a significant gap in the way alcohol brands were able to directly market their products online,” Thirstie's Mr. Southworth said. “Current regulation doesn't allow brands to sell directly to a consumer, so we developed a white label solution that allows brands to connect their Web and mobile platform to a network of retailers that can fulfill the transaction and still preserve the data to now fully understand the return on investment of brand marketing funds.”

In addition to offering consumers a direct way to buy, Thirstie gives brands data about their consumers.

For instance, Farfetch inked an exclusive partnership with Gucci to allow shoppers to have a capsule collection of apparel and accessories delivered from “Store to Door in 90 Minutes.”

French luxury conglomerate LVMH is focusing on its spirits business as the group begins an ecommerce entrance.

Although the sector is a pillar of LVMH’s businesses, the spirits category is an interesting ecommerce testing ground due to the strict distribution regulations of alcoholic beverages, and how each market enforces such mandates. LVMH’s ecommerce entrance will focus on the wine and spirits brands found under the Moët Hennessy banner (see story).

Since Hennessy does not have direct-operated storefronts and has little control over how its brand is presented at licensees, partnering with a service such as Drizly allows for quality assurance (see story).

When selling a luxury product, the customer service has to live up to the brand's positioning.

"Our desire with this partnership is to provide a seamless technology and delivery service experience, on par with the reputation that precedes the most prestigious Champagne in the world," Thirstie's Mr. Southworth said. "The epitome of a personalized consumer experience, each delivery will arrive ready to taste within an hour.

"We worked exhaustively with the team at Dom Pérignon and Moët Hennessy to create a delivery standard that would live up to the brand promise," he said.