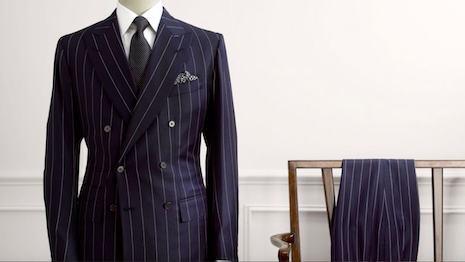 While all recent attention has been lavished on the Trump administration’s decision to impose tariffs on $2.4 billion-worth of typically French goods, more neglected is the impact of added taxes on the United Kingdom’s best import: bespoke suits from Savile Row in London.

It has been almost two months since President Trump imposed a 25 percent tariff – on top of an existing 12 percent tax – on the importing of Savile Row tailored suits into the United States.

Those tariffs are a retaliation for the European Union subsidy to Airbus which the U.S. opposes since it disadvantages its own homegrown Boeing Co.

Savile Row has faced the unfortunate fallout over that issue.

Say cheese
As has been astutely pointed out by the Savile Row Bespoke Association, the Trump tariff does not apply to French or Italian tailors.

To be fair to France, that country is now in the crosshairs of the Trump administration for its imposition of a digital services tax which, the way it is structured, will squarely affect Facebook, Google, Apple and Amazon, and protect French rivals.

So, in a few weeks there will be 100 percent tariffs on French specialties such as Champagne and wine, cheese, yogurt, handbags, porcelain and cosmetics (see story).

Bernard Arnault, chairman/CEO of LVMH, the world’s largest luxury conglomerate, has so far been mum on the impending tariffs on these French products. His Paris-based group is heavily invested in Champagne and wine, handbags and cosmetics, in addition to other categories such as fashion apparel and jewelry.

Hedging his bets, Mr. Arnault is opening new workshops to make products locally. President Trump’s presence at the ribbon-cutting ceremony of a Texas factory aroused plenty of opprobrium from within LVMH and also industry observers.

But the third-richest person on Earth – Mr. Arnault is on track next year to overtake Jeff Bezos and Bill Gates, first- and second-richest – is not fazed.

The Texas operation, one of two in the U.S., will make Louis Vuitton’s trademark cotton canvas bags – a best-selling product in the company’s portfolio, popular the world over.

In that sense, Mr. Arnault is far-sighted. He is buying his group insurance to increase organic U.S. revenue as trade and tariff wars intensify under President Trump.

Cut from a different cloth
For Savile Row, the blow is hard. Most tailors hold trunk shows several times a year on the East and West Coasts, with stopovers in Dallas, Chicago and Miami. Top favorite destinations are New York, San Francisco, Washington, Boston and Los Angeles.

Many of them have their origins in military tailoring, such as Gieves & Hawkes. And they bear the British royal family’s warrants for supplying suits or military uniforms.

Anderson & Sheppard, for example, has the warrant from the Prince of Wales for supplying suits and Gieves & Hawkes for military uniforms.

This endorsement is invaluable to attracting prospective customers and retaining existing business from those who hold up Prince Charles as their sartorial inspiration.

While numbers are hard to come by – most Savile Row tailors are family-owned firms – it is safe to assume that U.S. customers account for almost one out of two dollars in spend.

Indeed, the types of clients in their order books – professionals, entrepreneurs, Hollywood celebrities, Anglophiles and Old Money – travel frequently to Savile Row to order new suits. Follow-up fittings or even new orders are part of the U.S. trunk-show process.

While an added 37 percent tariff to these bespoke Savile Row suits may not pinch their clients, it does give pause for thought. Add to that the VAT taxes that may or may not be claimed and the cost of the suit is up 50 percent from the base price.

Once prices inch higher, then Savile Row tailors bump up against luxury designers such as Ermenegildo Zegna, Brioni, Kiton and Giorgio Armani. These designers typically charge five figures for bespoke and the grade below, made-to-measure, suits.

As it is, British business is reeling from the potential effects of Brexit. Now, on top of that, it has to contend with tariffs from its most important market after the European Union.

Row harder
Savile Row tailors are a unique institution, to the United Kingdom what Champagne is to France.

A mostly male bastion, the tailors spend years as apprentice cutters before being assigned to jackets or trousers – an endeavor to which they will invest their entire working life.

Once the cutters have done their job, the cut fabric is bundled up and sent to actual tailors and seamstresses who will do the needle work. These seamstresses typically work offsite from home and are not always fully paid employees but freelancers or on contract.

Even here, Savile Row has a looming issue. Brexit will reduce the pool of tailors who can sew. For a long time, Savile Row has struggled to attract native Britons to spend the years as apprentices before graduating to cutters.

The situation for seamstresses and actual tailors is similar: not enough local British talent, forcing them to rely on immigrants from Eastern Europe to do the actual stitching together of the garments, be it suits or overcoats.

Another trend that has yet to affect Savile Row as much as it has hit department stores and other brands selling suits is the casualization of work dress.

Investment banks, for example, have lowered dress standards, not requiring suits or ties unless for client-facing occasions. But the threat is ever-present as consumers switch to tieless suits, no suits or simply sports jackets.

Indeed, the demand for bespoke sports jackets and trousers is increasingly turning into decent business for Savile Row and may, at some point, equal suits.

For now, the Savile Row Bespoke Association is lobbying the U.K. government to convince the U.S. to drop its tariffs on bespoke suits.

Expect more clarity after the U.K. splits from the E.U. and is free to ink a free-trade agreement with the U.S. Till then, Savile Row tailors will have to amp the charm with their existing customers and prospects.

IT WAS CHEEKILY pointed out that President Trump, unlike some of his predecessors, does not wear Savile Row suits. Hence his apathy for bespoke British tailoring, although he is Scottish from his mother’s side.

While many U.S. presidents in the last century may have patronized Savile Row and British tailors – JFK, for example, or President Reagan wearing Turnbull & Asser shirts from London’s Jermyn Street – they chose to disclose their U.S. tailors, especially Brooks Brothers, for patriotic reasons.

President Trump has come in for his fair share of criticism for wearing suits that do not closely hew to his body dimensions or for a tie that dangles way past the mandated length of stop-at-belt-buckle.

But Mr. Trump does wear bespoke, and his suits may soon become more expensive if he gets his way. His tailor: Italian brand Brioni, owned by French luxury group Kering.

How to make a Savile Row suit, part 1: Museum of Modern Art presentation

How to make a Savile Row suit, part 2: Museum of Modern Art presentation