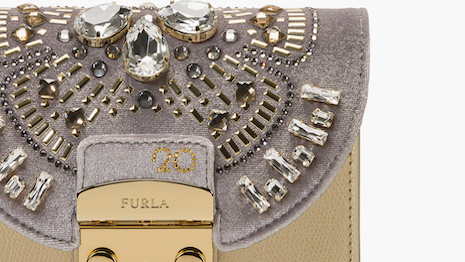 Italian leather goods maker Furla is celebrating its 90th anniversary by recounting the fashion trends of the past nine decades.

Over the last 90 years, Furla has designed leather goods that have evolved with women’s tastes, whether that be the romance of Art Deco or the boldness of punk rock. Taking a look back at its history, Furla choose to create a series of nine handbags that retell past fashion trends in the form of its Metropolis silhouette.

"This is a great way to celebrate [Furla's] history by reinterpreting their aesthetics throughout the decades," said Dalia Strum, professor at the Fashion Institute of Technology and founder of Dalia Inc., New York.

"The decade collection is a true connection to such a relevant milestone, that there is definitely a demand from their highly brand loyal consumer," she said.

Ms. Strum is not affiliated with Furla, but agreed to comment as an industry expert. Furla was reached for comment.

Time travel
Working its 90th anniversary concept into today’s trends, Furla took to the streets of Milan Feb. 22 to debut the capsule collection during the Italian city’s fashion week.

A parade of models dressed in tuxedos and Furla sneakers walked by the Duomo di Milano and through the Galleria Vittorio Emanuele II shopping arcade, with some breaking out into swing dance routines. Each of the models carried a 90th anniversary Metropolis handbag. 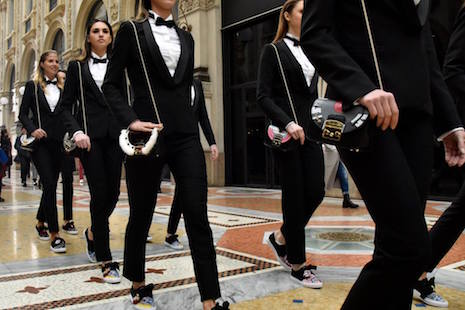 Furla designed the Metropolis’ flap to represent each of the nine decades it has been in business.

Founded in Bologna in 1927, the first decade to be brought to life is the 1920s. Furla’s 1920s Charleston style shows the Metropolis with a flap encrusted with stones to evoke an Art Deco-period design.

For the glamour of the 1930s Jazz Age, Furla designed a flap of tortoiseshell PVS with ivory colored mink piping around the edge.

The next decade, characterized by “the crazed rhythm of Swing” includes a leather ruffle and bow in a petal and ruby check. The design is meant to resemble the pin-up girls of the 1940s.

Music was also explored for the 1960s Beat Metropolis by featuring a turnable and volume knob. Furla’s logo and 1960 appear in the center where a vinyl LP’s label would appear.

The glitter of 1970s disco was explored the next decade. Furla used glitter fabric, flat sails and mirrors to create a disco ball effect on the Metropolis’ flap.

Studs, safety pins and a heart-shaped plaid and denim patch were added to create a 1980s punk style, and 1990s hip hop and techno were explored with a “bling-bling” aesthetic.

For the last piece of the collection, meant to celebrate the 2000s, Furla focused on technology and the “dawn of a new millennium.” This was achieved by silver laminate lined with folding plates to create a robotic face along with rhinestones and screw-shaped rivets. 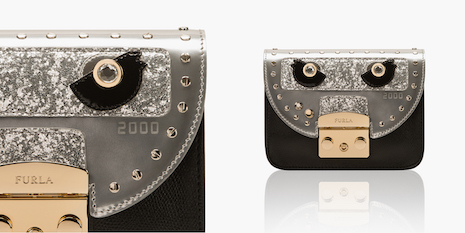 Each of the nine handbags include its decade printed somewhere on the flap, for a numbered effect. Furla’s 90th anniversary collection will be available in stores and online from May 2017.

Looking back
In addition to the collection, Furla’s handbag shares its history with consumers for added context.

Text tells of the brand’s start as a family business and how its first storefront, opened in 1955, is still in operation on Ugo Bassi in Bologna.

From there, Furla tells of its global expansion in the 1970 and '80s when the house was taken over by Aldo Furlanetto’s children, sons Paolo and Carlo and daughter Giovanna.

Today, Furla operates a distribution network in 100 markets. In 2015, Furla upped its global retail strategy with the opening of a Fifth Avenue flagship.

Furla’s retail expansion has seen boutique openings in growing markets such as Japan, Spain and in the United States, after which the brand had seen a spike in sales worldwide and a rise in consumer awareness for its goods. The New York flagship, located on the corner of 51st Street and Fifth Avenue, serves as Furla’s cornerstone location as it repositions itself in the U.S. market (see story).

Also part of its 90th anniversary celebration is context focused on its Fondazione Furla created by Ms. Furlanetto more than 15 years ago.

Two years ago, Fondazione Furla celebrated its own milestone, its 15th anniversary. The brand honored the work of Fondazione Furla with a retrospective spanning the lifetime of its art award.

Held at the Palazzo Reale in Milan, “Growing Roots” brought together 10 past winners of Premio Furla to explore the diversity of Italian art. This retrospective helped both commemorate Fondazione Furla’s past while the exhibit’s location likely drew attention to the prize (see story).

"By including their expansion plans and philanthropic efforts within their anniversary communications, their goal is to bundle highly relevant brand information with press worthy info to increase the content relevancy and delivery format," Ms. Strum said. "It's a value add for investors and PR, along with potential press."