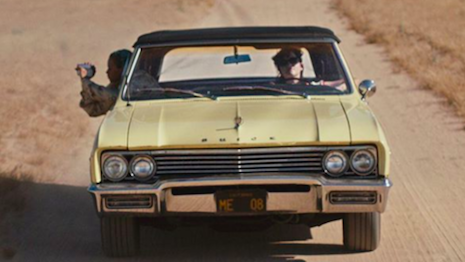 Italian fashion label Gucci is continuing its outreach to younger generations by turning to student directors to debut its latest footwear.

In a collaborative project with Garage magazine, students from New York University’s Tisch School of the Arts created short films around the Ultrapace sneaker. While created as digital films, Gucci is directing consumers to its SoHo boutique to watch the films in their entirety, focusing on creating an in-person screening experience.

"The overall campaign was a very well-executed media partnership with Garage magazine," said Nathan Poekert, global communications director for BMW Group - Mini innovation and strategy. "By having Garage handle the bulk of the distribution of the full films, it gave Gucci the opportunity to be more tactical with their own launch.

"A lot of brands will try and launch heavy in digital with a 'please look at me' canvas approach," he said. "Since this is such a small launch in the grand scheme of their full collection, it can accomplish a lot more by creating an exclusivity factor with the films being an in-store release versus digital."

Mr. Poekert is not affiliated with Gucci, but agreed to comment as an industry expert. Gucci was reached for comment.

Foot into film
Gucci’s Ultrapace is one of the lead characters in each of the films.

The protagonist in Madeline Leshner’s “Getaway” is first seen riding on a subway. After getting home she has a phone call with her mother and sees a mess created by her canine roommate, which triggers her to pack a suitcase and escape with the dog.

Next the lead character is seen boarding another subway and heading to Far Rockaway in Queens along the water. Unable to catch a bus to New Rochelle, NY she walks around the area and comes across painter and a dancer, the latter of whom takes her on a journey home.

“Easy” by Mary Evangelista similarly portrays a getaway, as two young women head out on a road trip. They pick up a hitchhiker and dance in the desert before arriving in Los Angeles for karaoke.

Sebastian Sdaigui’s “Schmood” is captioned in text and emojis, using a modern language to underscore the story of four young friends. In a sense of escapism courtesy of his posse’s support and a blindfold, the protagonist enters his own world in which he can freely dance, bopping to a beat in Ultrapace sneakers.

@garage_magazine and @gucci have partnered with four of NYU’s most innovative young filmmakers to create short films imagining a day in the life of the new unisex Ultrapace sneaker from their unique points of view. Come join us at the Gucci Wooster Bookstore for a screening of all four films, 8/7 at 7pm! #GucciUltrapace

Pepi Ginsberg’s “Lifted” follows motocross riders Olivia Vardaro and Laura Valcich as they explore their part of Long Island on their bikes. In a voiceover, Ms. Valcich explains that the feeling of riding brings a weightlessness.

"The films certainly give me a feeling of escape, and that one can do so without necessarily leaving where you are," said Laura Zheng, vice president of design and creative at Endeavor. "There is a strong feeling of nostalgia and 'running' away with the Ultrapace on your feet. A very versatile shoe for next iteration of you."

While each of the filmmakers have posted the videos on their own digital channels, Gucci and Garage have not shared the films in their entirety. Consumers are encouraged to go to the Gucci Bookstore at its Wooster Street store to view the shorts until Aug. 28.

"These films are films, which is to say they are only truly enjoyed in a theatre setting with no distractions, with all the details amplified and all the minute elements that only film can give," Ms. Zheng said. "Videos have become noise, because seeing them in a feed is optional, bite-sized and ephemeral, whereas film is still focused and immersive. The size of the screen itself even provides that.

"The way that video is used on social is a lead in and can be effective in communicating a feeling, a powerful brand voice, but for the immersion of a product to happen, I still believe sitting and watching is the most effective," she said. "They can likely also reach a new audience that doesn't necessarily have the reference for the feeling of film or that nostalgia, but this could be a great gateway and becomes one with how the brand is perceived.

"I can't think of a better or more literal way of using online and offline by pulling people into the physical store because they connected with a vibe they saw on social media or online."

Gucci frequently works with artists to bring a new perspective to its product launches.

Recently, the brand explored the ways in which digital mediums have evolved with the second edition of a social media project.

Gucci is launching a follow-up to its 2016 #24HourAce initiative, asking artists to create a short film or animation inspired by its Ace sneaker. While under the same name as the first edition, this round reflects the changing social media landscape over the last three years (see story).

"Garage x Gucci is a really poignant example of an overall trend that's moving away from influencers and moving more towards true content creators," Mr. Poekert said. "By working with up-and-coming artists and creators, it benefits the brand not only from a perspective of a more efficient means to get usable content and UGC, but the results are also way more authentic than that of a #SP post from a fashion influencer."

The campaign was created entirely by female artists, supporting Gucci’s stance in hiring a more diverse set of creative talent for its campaigns. The digital campaign featured 15 female artists and writers who have created content for the campaign (see story).

"For older luxury brands that used to once dictate culture, the new focus is on connecting to the multitude of counter- and sub-cultures in order to create a story bigger than any one brand, and a lot of that germinates in places like universities," said Jasmine Bina, CEO of Concept Bureau, Santa Monica, CA. "Names like Gucci see their new roles in the luxury ecosystem as co-creators, almost curators of what is worth allowing into the canon.

"With this Garage magazine Ultrapace campaign and other campaigns like #24HourAce, Gucci, and Alessandro Michelle specifically, are seeding their luxury vision in every corner of culture because they believe it is a living, breathing thing that morphs and evolves as it travels through different audiences," she said. "Non-models, domestic scenes, humorous slice-of-life closeups - these honest images create a latitude that younger audiences can find themselves within."