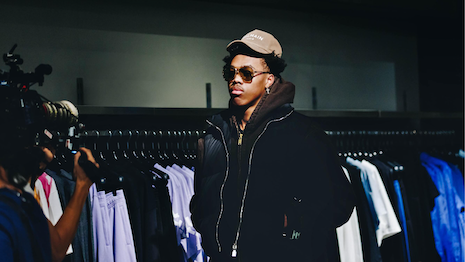 As part of its “Uninterrupted” series, the retailer invited NBA Rookie of the Year Scottie Barnes to put together some outfits at its bricks-and-mortar location in Toronto. The campaign features the Toronto Raptors star exploring his own fashion tastes, inspiring consumers to channel the store’s ethos in making their own sartorial rules.

“When you are a department store that has existed for that [long] length of time, you want to keep your vision fresh by having someone like Scottie Barnes aligning his brand and point of view to show another element to what we can expect from Holt Renfrew,” said Kimmie Smith, cofounder and creative director of Athleisure Mag, New York.

“You want to make sure that you have a fashion director or someone that speaks for the store that has their hand on the pulse of what’s going on so that you can continue to evolve and that you can navigate a number of demographics for a greater market share.”

For three, for luxury
The vignette opens with Mr. Barnes standing in front of a backdrop that resembles a wall of tin foil, presented in a chic and artistic fashion. The 20-year-old American is one of the leaders of Canada’s only NBA franchise, allowing Holt Renfrew to capitalize on the team’s popularity.

As he discusses a mutual love shared between him and a pair of pants he is wearing, an eclectic yet playful feel is immediately established. The question “What do you wear” appears four times on the screen as a hip-hop soundtrack begins to permeate in the background. Suddenly, a dozen images of the basketball player in different looks from the store overlay.

Mr. Barnes begins the video with a welcome, announcing his presence at the bricks-and-mortar store in Toronto. Shots of the expansive store’s offerings hit the screen.

The basketball player then sits in a chair in the middle of the store and explains that he’s going to pick a card from a nearby deck that reads “HOLT” on the back of each card. Each card offers a scenario that Mr. Barnes will have to plan an outfit around.

The short film’s feel is fun and inviting, and Mr. Barnes is so affable that the partnership makes consumers feel invited to be part of the experience.

For the first round, he selects a card that reads “award season but make it vintage.” He is prompted to build his best award season after-party outfit inspired by vintage style.

B-roll reveals more of the retailer’s upscale goods. Mr. Barnes then announces he is enlisting the help of Joseph Tang, fashion director at the store.

While looking through several shirts and trousers, Mr. Tang asks if Mr. Barnes follows the “rules” when it comes to after-party dressing. Mr. Barnes laughs the inquiry off with an impassioned no, fostering the creative ethos of Holt Renfrew.

With a handful of clothing options to try on and a pair of sunglasses, Mr. Barnes walks to the dressing room.

His first look is a Balmain cotton logo baseball cap, Gucci sunglasses, a Givenchy puffer vest and Northern Touch vintage sweater and pants. He discusses his love for the pants and how living in Toronto has changed his style.

Through the vignette, consumers continue learning more about Mr. Barnes, including his favorite musical artists and Toronto restaurant.

For his second look, he is called upon to create a look that will “for sure turn heads.” 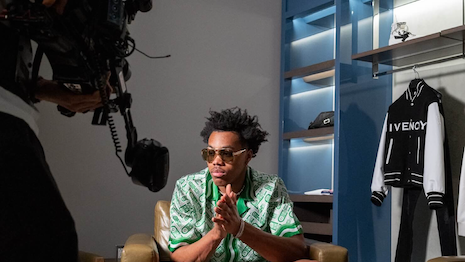 Reuniting with Mr. Tang, the pair agrees to experiment with a bit of color and jewelry.

While posing for more photos in his new outfit, the baller praises the swagger and style of his NBA colleague Jordan Clarkson and names Miami his favorite city on the road.

For his final outfit, Mr. Barnes announces he is not picking a scenario but is going to put together something on his own contrition, a freestyle. He emerges with a black and white Fendi shirt, another baseball cap and black leather pants.

Mr. Barnes is the ideal ambassador for Holt Renfrew, as he encourages a willingness to embrace individuality and a freedom to utilize fashion as a means of self-expression.

“I just go off what really catches my eye, when I see something I really like, I find a way to put different things together as best I can,” he says in the film.

Inspired by optimism and the opportunities of tomorrow, the campaign featured bright and colorful men’s and womenswear as the retailer explores themes of hope and joy. Filmed in Toronto last fall, the campaign included a short film and still imagery, as well as behind-the-scenes interviews with the Canadian singer (see story).

Above all, Holt Renfrew continues weaving its ethos of freedom to self-express into its marketing.

“I think that whether you come to this video through the lens of following your favorite athlete or team or you come to it as a person who enjoys fashion, this is entertaining,” Ms. Smith said. “You get to be introduced to new pieces or brands, you hear from Scottie as well as Joseph on what their thoughts are, you see the clothes being worn in shot behind a fun visually textured backdrop with Polaroids – it has a relaxed feel even though these are luxury brands.

“He’s wearing the clothes, they aren’t wearing him and it encourages self-expression,” she said. “It also lets you see what Holt Renfrew has to offer as a department store.”