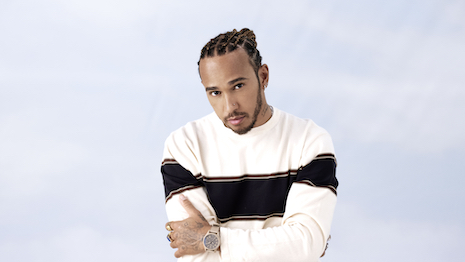 Lewis Hamilton has been an IWC brand ambassador since 2013. Image credit: IWC

In “I Am A Big Pilot,” the world champion race car driver reflects on how he has broken barriers throughout his career. The IWC campaign is the latest effort from the watchmaker centering the determination of star athletes and others.

“We could not have found a better person than Lewis Hamilton to express the unique character that the Big Pilot’s Watch embodies,” said Franziska Gsell, chief marketing officer and sustainability committee chair at IWC Schaffhausen, in a statement. “He is not only a remarkable athlete but a multifaceted personality driven by passion and purpose, using his voice to speak out.

“Lewis deserves our deepest respect for his achievements, not only on the track but also as a driver of change,” she said. “As we strive to become a more inclusive organization in line with our ongoing commitment to sustainability and responsibility, we are proud to partner with Lewis who embodies these values on this new campaign.”

Big Pilot
The vignette is set in an industrial space with metal staircases. Mr. Hamilton is seen sitting on the steps, and his voiceover begins.

“When I look back to where it all started, I was driven by a dream to become the fastest driver of the fastest cars,” Mr. Hamilton says.

The faint ticking of a watch is overpowered by the roar of race car engine as Mr. Hamilton is shown with speeding lights around his face.

Lewis Hamilton continues to advocate for more diversity in motorsport

Mr. Hamilton was the first Black driver to race in Formula One when he signed with British automaker McLaren in 2007. Archival footage shows the Englishman as a young driver and winning his first championship.

“So I rose, driven by this dream and powered my passion,” Mr. Hamilton says. “And I became the driver I am today.”

Now racing for Germany’s Mercedes, Mr. Hamilton is tied for the record of World Drivers’ Championship titles, most wins and other achievements in Formula One.

His ambitions now go beyond racing, and Mr. Hamilton describes himself in the spot as a “driver of change.”

More than a decade after his debut. Mr. Hamilton remains the only Black driver in Formula One and has advocated for more diversity in motorsport. He also publicly supported environmental and human rights causes, among others.

The film ends with Mr. Hamilton declaring: “I am a Big Pilot.”

Campaign imagery was shot by Nigerian-born British photographer Misan Harriman. He became the first Black person to photograph the September cover of British Vogue, and has been named a new brand ambassador for IWC.

As part of the Big Pilot campaign, Mr. Harriman interviews Mr. Hamilton, who became a IWC brand ambassador in 2013. The two men discuss using Formula One as a public platform, challenges ahead of the racing seasons and Mr. Hamilton’s latest diversity and inclusion efforts.

Earlier this year, Mr. Hamilton joined fellow brand ambassador Tom Brady to discuss the title of “greatest of all time,” how the athletes have given everything they have to their professions and the role that timepieces have played in their images. The effort, entitled “Talking Big-GOATs,” was moderated by actor and television host James Corden, and offers consumers an intimate and entertaining glimpse into the thought processes and morale of the inspirational star athletes (see story).

In 2020, the watchmaker released several installments of its “Born of a Dream” film campaign.

The first short film of IWC campaign’s was called “Born of a Dream: A Boy from San Mateo,” telling the story of how Mr. Brady pursued his childhood dream to become a champion quarterback. The storytelling element of the video plays up the similarities between Mr. Brady’s core values and the values of the IWC brand (see story).