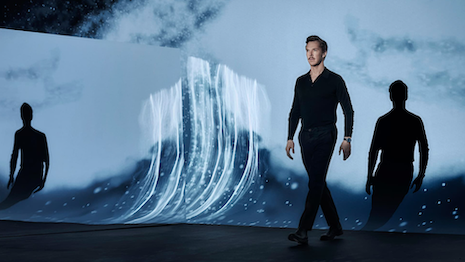 Swiss watchmaker Jaeger-LeCoultre is introducing its newest Polaris Perpetual Calendar model through a cinematic depiction of time and movement with actor and friend of the house, Benedict Cumberbatch.

In staying true to Jaeger-LeCoultre’s philosophy of blending tradition with modernity, the new watch brings together a historic complication and contemporary style. In the short film, the Sherlock actor is seen wearing the watch as he explores three natural environments: lakes, forests and the skies.

Movement of time
The latest campaign is part of a series called “In Perpetual Motion” featuring various Jaeger-LeCoultre ambassadors. Each film aims to highlight various notions of time and space.

“I am an immersion in a shifting shape,” he says in a voiceover. “I am an ever-changing side of time — always on the move and always the same.”

Shots of the British actor portray him in a near-celestial environment, and the violin-heavy soundtrack builds intensity throughout the film.

“I let the light filter through my leaves,” Mr. Cumberbatch says. “My future grows along my past.

“I am the quest of endless beauty,” he continues. “Every second is punctuated by stars; every moon takes me even higher.”

The trapezoidal Super-LumiNova hour-markers and hands with luminescent tips offer optimal readability at any time of day or night. This model also features a system of interchangeable straps, one in stainless steel and one in blue rubber.

The new watch introduces the in-house caliber, 868AA, which automatically takes into account the months with 28, 30 or 31 days, as well as leap years. The date, month and day indicators are situated at nine, 12 and three o’clock, respectively, and the moon phases are at six o’clock.

Power of Hollywood
It is no secret that brands have harnessed celebrity voices to propel collections and brand messaging, but recently watchmakers have turned to various men of Hollywood to represent them.

The brand chose Mr. Page to embody its new expression of elegance due to his keen sense of style and refreshing self-awareness. While his role as the Duke of Hastings in Netflix’s binge-worthy series “Bridgerton” launched him into stardom last year, the actor is expected to attract more global attention for his upcoming roles in the films The Gray Man and Dungeons and Dragons (see story).

It was the first brand ambassador deal for the versatile actor, known for his work in films including La La Land, Drive, Blue Valentine and The Notebook. Mr. Gosling collaborated with acclaimed photographer Pari Dukovic for his first Tag Heuer campaign, featuring the Carrera Three Hands timepiece (see story).