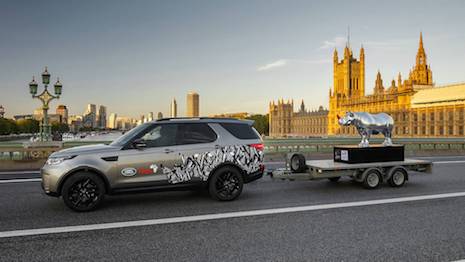 British automaker Land Rover is among the luxury brands partnering with the Tusk Rhino Trail arts initiative in another show of the marque's commitment to philanthropy.

Taking place in London, the Tusk Rhino Trail is a citywide arts installation that draws attention to the poaching threat facing rhinoceroses in the wild. Other luxury brands are sponsoring individual rhino designs, which will be sold by auction house Christie's later this fall to benefit Tusk.

The unique rhino sculptures will be on display at iconic London sites, including Trafalgar Square and Covent Garden, through World Rhino Day on Sept. 22. Fans are encouraged to use another Land Rover philanthropy partner, geolocation software what3words, to find all of the rhino installations.

Each of the 21 rhinos were designed by a wide range of artists and designers. Land Rover's chief design officer, Gerry McGovern, designed the brand's rhino statue.

Mr. McGovern opted for a minimalist approach. The four-foot rhino is made of chrome with its horn painted red to signify the dangers rhinos face as they are hunted for their horns.

“At Jaguar Land Rover we are committed to working on projects that not only demonstrate the talent of our designers but also highlight the vital work carried out by charities like Tusk," said Chris Thorp, responsible business director at Jaguar Land Rover, in a statement. "In our long-standing partnership we are continuing to enable Tusk to reach remote territories using Land Rover’s all-terrain capability, making it the perfect fit for conservation work all around the world." 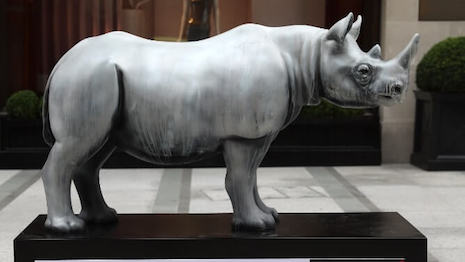 De Beers Group’s Forevermark partnered with Dave White, whose work focuses on pop culture, for his sculpture, "Fragile." The diamond brand's support of the initiative continues its existing work on rhino conservation.

“De Beers has been active in the conservation of rhinos for many years and it is our shared belief that all species, including the white and black rhino which are critically endangered, belong to the planet and must be protected for future generations," said Costantino Papadimitriou, chief marketing officer at Forevermark, in a statement.

Like Land Rover, Forevermark also released a video which further elaborated on its support for Tusk's rhino preservation efforts.

The luxury industry is taking an active role through charitable partnerships and awareness campaigns, including environmental issues.

For instance, U.S. jeweler Tiffany & Co. turned to its fashionable friends during New York Fashion Week to lend its support to the Elephant Crisis Fund (ECF).

Tiffany teamed up with model Doutzen Kroes, who serves as the global ambassador for ECF, for the second #KnotOnMyPlanet campaign. The campaign objective is to raise support and awareness for the work of the ECF, whose mission is to stop elephant poaching and end the global demand of ivory (see story).

Working with the nonprofit Peace Parks Foundation, De Beers is translocating 200 elephants from the overcrowded Venetia Limpopo Nature Reserve in South Africa to conservation areas in Mozambique, which have seen dwindling populations of the animals. Elephant conservation has been a shared priority for a number of luxury brands, as they use their resources to help protect the endangered species (see story).