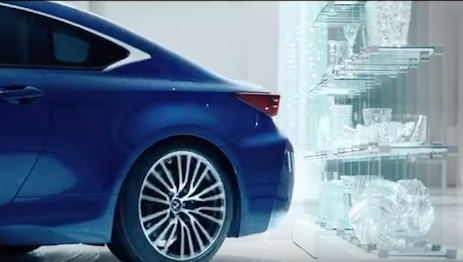 Still from Lexus' The Crystal Gauntlet

Toyota Corp.'s Lexus has teamed with French crystal-maker Baccarat to show off its vehicles' high-quality performance and precision with its latest vignette.

“The Crystal Gauntlet” with Baccarat is the latest video from Lexus and shows off the automaker's GS F, RC F and LC 500 models, driven by drift world champion Rhys Millen and drivers he has personally selected. The film heightens the drama with stunt driving in a room of Baccarat crystal.

Performance and precision
Lexus' campaign features all real stunt driving to keep viewers at the edge of their seats and build up the brand's “cool factor.”

While many automakers share videos that show off their vehicle's performance power with a closed track or a race track, Lexus has increased the drama by putting its cars in a crystal showroom.

The video starts out with footage of Baccarat crystal on display, with text that says, “Finely crafted crystal.” Then three of Lexus' vehicles appear lined up, engines revving with the text, “Finely tuned performance.”

One by one, the cars begin stunt driving around the crystal, leaving skid marks in tow. At one point, a vehicle comes extremely close to a shelf of crystal, shown in slow motion.

All the crystal remains unharmed, and the video ends with the phrase, “Shatter expectations, nothing else.”

The video and accompanying imaging has been shared over Lexus' official social accounts, hoping to drum up attention.

Lexus campaigns
Lexus also showed off its sense of humor as it debuts an imagined feature aimed at clearing the road ahead.

Japanese automaker Lexus recently challenged audiences to “Make Your Mark” in a marketing effort launched for the new LC coupe.

The LC flagship model has been hailed as a new era for Lexus, one where the automaker will make its own mark on the larger high-end automotive industry. Taking its Make Your Mark concept a step further, Lexus has aligned with international music producer and singer Mark Ronson for the effort (see more).

"All of the stunts performed are 100% real. Lexus could have taken the safe route and used fake glass, however we dared to use genuine Baccarat crystal," Ms. Hubbel said. "The vehicles came extremely close to the pieces, however no crystal was harmed in the making of the video – showcasing the refined precision of the Lexus performance vehicles."