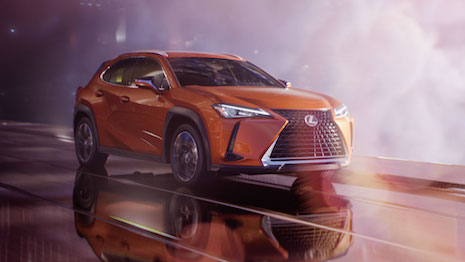 Toyota Corp.’s Lexus is appealing to urban affluents with a new crossover and a campaign that encourages drivers to push boundaries.

Sport utility vehicles have recently dominated the luxury automotive market, and the Lexus UX reflects the demands of the evolving environment. The crossover was developed with city dwellers in mind, as many younger affluents flock to urban centers and delay car ownership.

“The UX joins Lexus’ extensive lineup of luxury utility vehicles, however this is a significant launch as it’s our first compact crossover,” said Cooper Ericksen, vice president of marketing at Lexus. “The UX emphasizes our intention to attract a wider group of younger, connected consumers to the brand for the first time.

“For many buyers, the UX will not only be their first Lexus, but also their first luxury vehicle,” he said. “The UX was deliberately crafted for a city mindset.”

New frontiers
The UX – so named as a combination of urban and crossover – originated as a concept car for Lexus several years ago. City drivers have been at the forefront of the model's design since the beginning.

Lexus revealed its UX Concept model at Paris back in 2016. The automaker crafted its new crossover vehicle with its iconic look in mind, but with a focus on digital innovation to appeal to the modern urban driver (see story).

Lexus doubles down on the city connection through the setting of its new television advertisement, “Plant A Flag.”

On a dark evening, a woman appears to be driving a UX on a glass road and breaking through the clouds. As the sun gradually rises, it becomes clear that the glass road is in reality the side of a skyscraper towering above a city.

“The unknown beyond the horizon – that was once our frontier, but today a new frontier has risen,” a female voiceover says.

A companion ad, “A Different Frontier,” takes the UX to the streets of the city and emphasizes its connectivity features.

“[It] reinforces the notion that cities are the new frontier of American culture, and the UX is the luxury crossover uniquely crafted to conquer it,” Mr. Eriksen said.

Lexus UX campaign created for audiences in the United Kingdom

To extend the engagement of Lexus' original ES campaign, multicultural spots were created with black, Spanish-speaking and LGBTQ+ audiences in mind. Extra emphasis was also placed on the connectivity of new Lexus vehicles, since the ES will be compatible with Apple CarPlay as well as Amazon's Alexa for the first time (see story).

For audiences in the United Kingdom, Lexus released two videos that emphasized the UX's technology, including hybrid capabilities, and the automaker's Japanese craftsmanship. Less emphasis is placed on the type of drivers that the UX could appeal to, however.

“We hope to reach our target market of a 'modern urban explorer' – pioneers who explore, experiment and defy,” Mr. Eriksen said.

City slickers
Lexus has recently been looking for new ways to engage with younger audiences who tend to live in more urban environments.

The automaker went cross country and partnered with customization shops to give its RC F Sport artistic updates.

Lexus is visiting five different custom shops to enhance its sport coupe, asking them to transform the blank canvas of a vehicle with a white exterior with the help of music collaborators. Luxury automakers are increasingly turning to musicians to liven up their brands and reach new audiences (see story).

In a new short film sharing the redesigned Evoque, Land Rover steps away from its usual adventure-oriented narratives. Electronic music and bold colors dominate the film, though it still features footage of the Evoque off-roading (see story).