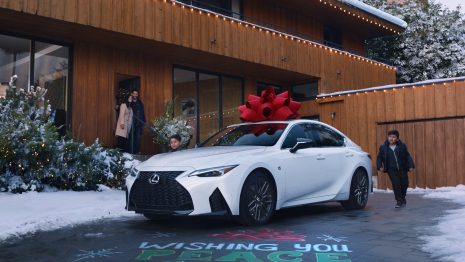 This is the 21st year of the December to Remember campaign. Image credit: Lexus

Toyota Corp’s Lexus is ringing in the holiday season with its iconic “December to Remember” campaign, which shows how people came together during this difficult year.

Now in its 21st year, the annual campaign is often driven by emotive storytelling. This year, Lexus is wagering that the advertisements will encourage drivers to visit the local dealership at a time when sales have dipped due to the pandemic.

“Lexus always does really well with the December to Remember campaign,” said Lauren Fix, automotive expert at The Car Coach, Lancaster, NY. “This is a way to get people into dealerships.”

Finding joy amid the pandemic
Since its inception in 1989, Lexus has joined other automakers in hosting a year-end clearance event around the holidays to clear out older model year vehicles. In 1999, the marque changed its marketing approach for the sale, shifting from promotional ads to ones that were more emotionally driven.

Lexus’ move was based on consumer research, which found that shoppers were moved by the gift-giving process and the reaction they received from their gift recipients.

Lockdowns and the pandemic have added a new twist to this year’s December to Remember effort, titled “Driveway Moments.” Lexus has released two different spots under this theme.

To show empathy after a year many would rather forget, Lexus puts people and their relationships at the forefront of the December to Remember campaign. Lexus vehicles play more of a cameo role in the ads, which recalls the drive-by parades which gained popularity at the outbreak of the pandemic.

"Driveways have become safe places to celebrate milestones, holidays, and accomplishments," said Lisa Materazzo, vice president of marketing for Lexus. "The campaign acknowledges the challenging year while celebrating the memorable moments that brought us all together."

In recent years, Lexus has embraced diversity in its campaigns

“Birthday” begins with a family four climbing into a Lexus SUV, with some holding cheerful posters. As the Lexus drives off, a message written with chalk is revealed on the driveway: “We’re all in this together.”

“This year our driveways have brought us all closer together and been our gateways to the world,” says the female narrator knowingly.

As the family SUV approaches a birthday party, the father briefly brakes so his children can greet their grandfather from a safe distance. They hold colorful signs saying “Happy Birthday Grandpa” and another driveway drawing reads “te amo Abuelo,” or I love you Grandpa, in Spanish.

A short line of cars is seen behind the main characters’ Lexus, continuing the birthday parade.

The next scene shows the family’s driveway once again. A Lexus employee, who is wearing a mask, drives up in a white Lexus IS sedan for a contactless delivery.

Finally, the family opens the front door and see the new Lexus for the first time, complete the classic red bow. As the scene fades out, a final driveway message is shown reading “wishing you peace and joy.”

The spots will air on cable, primetime and late night television.

“Graduation” follows a similar structure, with a family driving through their neighborhood in a Lexus SUV. More optimistic messages are seen on driveways, such as “stand tall and stay strong,” and neighbors are seen practicing yoga together on front lawns.

The family arrives for a drive-by graduation parade. Another graduate cheers from a Lexus convertible with a poster “Class of ’20 Rules,” again demonstrating how driveways and cars allowed people to safely celebrate their loved ones.

A graduation driveway celebration as seen in a December to Remember ad. Image credit: Lexus

The ads are airing on cable, primetime, late-night and sports programming including NFL, college football and the English Premier League.

The Lexus December to Remember event runs through Jan. 4.

Yearly tradition
Last year, the automaker took a more humorous approach to the holiday season with its annual December to Remember campaign.

The 2019 effort featured Lexus owners struggling to keep their gifts anonymous before Christmas.

One spot showed a father and son unsuccessfully trying to hide a large-scale bow underneath a bed, in a giant freezer and in a closet. Eventually, the dad gave up and took the bow with him to work, where he could keep it more easily hidden from his wife (see story).

For the 2018 holiday season, Lexus focused on the memories families can make together after they add a new Lexus to their households. While nostalgia remained a strong current throughout the vignettes, the advertisements were also forward-thinking and highlighted the longevity of a Lexus vehicle (see story).

Last year, 17.1 million light duty Lexus vehicles were sold while only 14.5 million are projected to be sold in 2020, according to Ms. Fix.

Given its past success, it is expected that this year’s December to Remember campaign will provide a welcome boost to sales amid the lingering pandemic.

“Everybody’s struggling and Lexus has a lot of new products on the marketplace,” Ms. Fix said. “Lexus has been doing this campaign for as long as I can remember.”