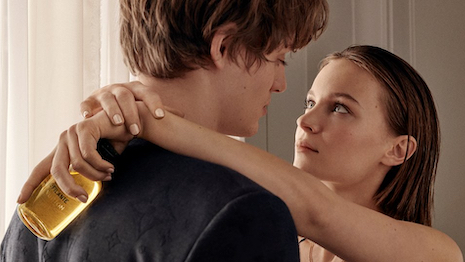 The vignette follows a couple creating romantic memories out of ordinary moments in their Parisian apartment. The campaign’s everyday elegance may particularly resonate with consumers as many remain close to home during the global pandemic.

“For luxury brands that have already gained a customer base for their fashion brands, launching fragrances may be just another way for consumers to maintain their loyalty,” said Romey Louangvilay, communications director at ELMNTL, New York. “This is not to say that the iconic luxury brands are aiming for an easy way to increase profits; luxury brands will pursue this route if the scent aligns with their brand DNA.”

Role-playing romance
The short film begins with an apparent meet-cute, with a young man and woman flirtatiously exchanging glances.

They walk past each other and bump elbows. The young woman drops a book, and the young man asks if they’ve met before as he picks it up for her.

She blushes and replies maybe.

Next, the man is seen slipping a note under a door, reading “dinner tonight?”

As the playful disco track “Music of Life” by Frenchman Marc Cerrone continues in the background, the man and woman are seen separately getting ready for their dinner date.

While earlier scenes featured primarily close-up shots, the wider angles show more of their surroundings — subtly revealing that the man and woman share the same apartment.

A close-up shot shows a flaconnier travel case filled with three Louis Vuitton fragrances, and one next to it. The fragrances include Météore, Heures d'Absence, Étoile Filante and Attrape-Rêves.

The young woman is seen selecting Étoile Filante, or “shooting star,” for the evening. It is the label’s newest fragrance, with notes of strawberry, jasmine, magnolia and musk, and appears to have a golden hue in the minimalist Louis Vuitton bottle. 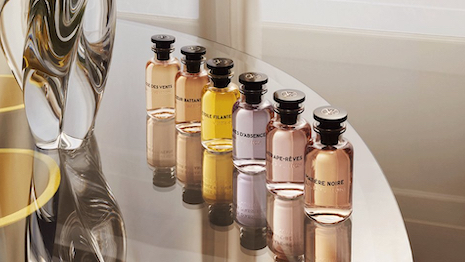 The couple then shares a simple dinner together, complete with Louis Vuitton place settings. After sharing more longing looks, they follow dinner with some dancing in their apartment.

They end the evening with a romantic embrace on their rooftop as the sun sets.

“In most fragrance campaigns, there is a clearly defined role on who’s the traditional ‘male’ and who is the traditional female, but the LV commercial blurs those,” Mr. Louangvilay said.  “Both characters take charge in their own way in setting up the date and the fragrances are highlighted in both perspectives without overtly indicating one scene is more masculine or feminine.”

Fragrance opportunities
While the romantic campaign shares timeless moments that are recognizable to many, the intimate setting — rather than an extravagant celebration of love — is relatable and reminiscent of today.

Fragrances such as the ones prominently featured in the campaign are valuable entry-level products for luxury brands. With a price tag of $265, a bottle of Étoile Filante is more within reach than many other Louis Vuitton products.

Consumers primarily gift fragrances to their spouses or significant others. Valentine’s Day, along with Mother’s Day and Father’s Day, is a key holiday for fragrance sales (see story).

In light of the pandemic, luxury brands have an opportunity to capture gifting budgets that may have been reserved for more experiential gifts.

For instance, a decline in travel spending may be a boon for other categories, according to research from diamond company De Beers Group. Without the ability to plan vacations, consumers report looking for “meaningful” and “practical” gifts (see story).

“Part of the major appeal that fragrances give for luxury brands is the accessibility and obviously, opens another revenue stream that also introduces the brand to wider audiences,” Mr. Louangvilay said. “This allows people who adore luxury brands like LV a way to experience the brand without spending too much money.”