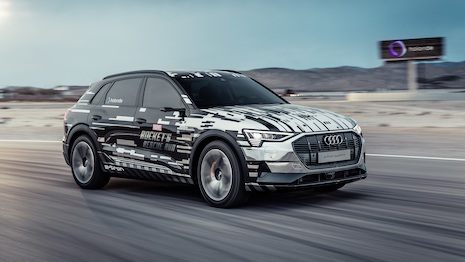 Audi, Lexus and Karma are among the car brands presenting new features at the annual trade show, taking place through Jan. 11 in Las Vegas. As the automotive industry continues to evolve, many of these initiatives revolve around automation and infotainment systems.

“Technology is a huge part of our lives and the automobile is an extension of that personal technology in our daily lives,” said Lauren Fix, automotive expert, the Car Coach, Lancaster, NY. “Showcasing upcoming tech and solutions to everyday problems is where the growth in the automotive industry is heading.

“Big trends for this year’s CES is more autonomous cars and integration into our daily lives,” she said. “Every year the automotive industry presence at CES grows, and every year it’s bigger and better.”

Wearing VR glasses, backseat passengers can experience movies, video games and other interactive content that adapts to the vehicle's movements in real time. Audi demonstrated these latest capabilities with its new electric vehicle, the e-tron, and collaborator, Disney Games and Interactive Experiences. 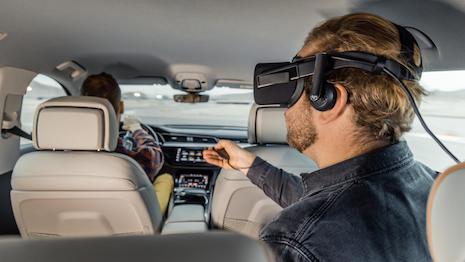 Audi is bringing VR to the backseat. Image credit: Audi

As part of “Marvel’s Avengers: Rocket’s Rescue Run,” the passenger wearing the glasses would see outer space and experience the car as if it were a rocket ship from the “Guardians of the Galaxy” film franchise. For instance, as the e-tron accelerates or makes a tight turn, the virtual rocket ship mimics this action.

Audi Electronics Venture GmbH co-founded a startup, holoride, that offers an open platform so developers can create virtual reality experiences and meet the demand for content, which Audi expects to grow.

Chinese automaker Karma is also highlighting new technology through a luxury electric vehicle, the Revero. It is the brand's first appearance at CES.

German automaker BMW is emphasizing connectivity at CES as well.

Attendees will have the opportunity to preview updates to the BMW Intelligent Personal Assistant. The digital assistant learns drivers' habits, preferences and helps manage other mobile needs.

Looking ahead to the future, guests can take a seat – through a mixed-reality simulation – in a BMW Vision iNEXT before it enters production in 2021. The vehicle is meant to be automated, emission-free and fully connected. 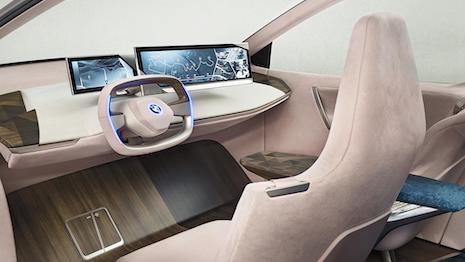 Toyota Corp.’s Research Institute is rolling out a new automated driving test vehicle that is based on the Lexus LS, enabling it to test concepts that augment or replace humans behind the wheel.

Per Toyota, the TRI-P4 is smarter than its predecessors, with better processing power and more extensive sight on the road. Unveiled at the Consumer Electronics Show in Las Vegas on Jan. 7, Toyota will put the TRI-P4 into production this spring (see story).

Driving forward
Automation and connectivity are increasingly being embraced by drivers.

Lexus parent company Toyota Corporation is looking to make driving safer by allowing its vehicles to communicate with other cars and infrastructure.

From 2021, Toyota and Lexus will begin equipping models in the United States with Dedicated Short-Range Communications (DRSC) technology, which can help prevent collisions and give drivers a heads up about upcoming road conditions. Toyota sees DRSC as a means of advancing both connected and autonomous driving, two areas seeing significant focus among automakers (see story).

Consumer satisfaction with new-vehicle technology has improved, but automakers need to be keen about what features drivers use the most to make the wisest investments of their efforts.

According to the J.D. Power 2018 U.S. Tech Experience Index (TXI) Study, navigation and voice recognition are among the most popular technologies used by drivers, but they are more likely to use their smartphones for those features than in-vehicle touchpoints. Automakers should instead focus on technology they alone can provide, though adoption of these advanced features varies widely among car manufacturers (see story).

“Companies like Audi, Lexus and many others are trying to be the first-in-class to offer the best in safety, autonomy, connectivity and communication,” Ms. Fix said. “First to market is the winner.”