Yet the claims were not the usual copyright or trademark claims faced by a fashion or luxury goods company. Rather, the claims were brought under a little-known federal law, the Telephone Consumer Protection Act, or TCPA, based on alleged mass texting of advertising messages.

Since the case was brought as a class action, Nasty Gal now faces potential exposure of millions of dollars.

TCPA suits can be a headache for companies who are their targets. Fashion and luxury goods companies considering using mass texts or phone calls need to be aware of the basics of this law and the pitfalls they might face. As in many legal areas, an ounce of prevention is worth a pound of cure.

The Nasty Gal suit
The complaint in Nasty Gal alleges that the plaintiff, an individual named Amanda DeFranks, received two unsolicited en masse texts from Nasty Gal in late May 2019: 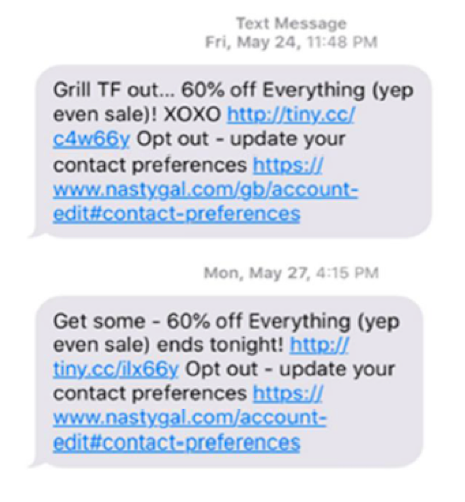 The complaint also alleges that the number used by Nasty Gal “is known as a ‘short code,’ a standard 5-digit code that enables defendant to send SMS text messages en masse, while deceiving recipients into believing that the message was personalized and sent from a telephone number operated by an individual.”

If true, that fact could be used to show that the violation of the TCPA was in bad faith, and lead to increased damages.

TCPA
In passing the TCPA in 1991, Congress sought to address and regulate telemarketing communications being indiscriminately broadcast over telephone lines where the telemarketer had no existing relationship with the recipient.

Among the concerns were privacy of recipients and costs born by recipients in receiving unwanted calls to cell phones and faxes to fax machines.

Key provisions of TCPA
The key part of the TCPA makes it unlawful to use an “automatic telephone dialing system” to place calls to one of three categories of recipients, the third and most important of which is “any telephone number assigned to a paging service, cellular telephone service, specialized mobile radio service, or other radio common carrier service, or any service for which the called party is charged for the call, unless there is prior consent.”

As the quote indicates, one condition for a violation is that the receiving party is charged for the call or text – which is still the case for many phone plans.

So, at least potentially, the TCPA applies to calls made to virtually any type of cell or smart phone. The FCC (which has authority from Congress to interpret and regulate activities within the TCPA) has construed this prohibition to include mass texting, as well as mass phone calls (and faxes).

While the TCPA literally only applies to use of an “automatic telephone dialing system,” the FCC has, somewhat controversially, ruled that virtually any automatic dialing system, including those typically used for mass robocalls and robotexts, qualifies.

The practical reality is that mass texting and mass phone calls to cell phones will likely be subject to the TCPA.

Written consent required
The best defense is consent of the recipients – the TCPA expressly states that consent makes the phone call or text lawful.

The FCC has required prior written consent from recipients for calls or texts implicating the TCPA that include advertising or telemarketing – which would include virtually any promotional text or call.

Exposure under the TCPA
As can be seen, it is very easy to violate the TCPA when using mass texting or mass-calling technologies to disseminate advertising or promotional messages. That can lead to significant monetary exposure.

The TCPA provides for an award of either “actual monetary loss” or $500 statutory damages for its violation, the latter of which can be trebled to $1,500 where the violation was found to be willful.

Although it will probably be the rare case where a recipient can show “actual monetary loss,” the $500 minimum statutory damages appears deceptively small.

First, that is for each “violation” – and each call or text can be a separate violation. If a company sent ten texts, that is ten violations, and the damages are multiplied accordingly.

More importantly, each recipient can claim that amount. So, if one text were sent to, say, 10,000 recipients, there is now potentially $5 million in exposure from one text.

A “class action” is a legal procedure device where one plaintiff or a few plaintiffs represent a whole “class” of injured parties seeking damages from a single defendant or group of defendants. It is often used in cases where there are many similar claims, for example tort claims resulting from a plane crash or defective products.

Class action treatment is not automatic – the court has to certify the case as a class action. While at one-point courts were reluctant to grant class certification to TCPA cases, more recently courts have been willing to do so.

That has the potential of making one bad texting campaign very expensive – the company sending the texts now faces thousands of small claims in a single suit.

Best-practice tips to avoid TCPA violations
If your company wants to use mass phone texting or calls as a marketing vehicle, then there are some best practices which will reduce the likelihood of violations:

Deal with reputable third parties. Many companies use third party vendors for this kind of promotion. Make sure you are dealing with a reputable company. Ask specifically about TCPA compliance, and what databases are used as the source for the texting or calling.

Remember, the fact that you are using a third party does not insulate you from TCPA liability – both companies can be held liable.

Maintain an accurate and current Do Not Call database. The FCC requires each company to maintain its own database that is linked to the national Do Not Call Registry.

Get consent and keep good records of it. Consent is a powerful defense to any TCPA claim. This can be a good way to proceed where a business is sending communications to a database of its customers, for example. But you have to both (a) make it clear to the customer that he or she is giving consent for calls, and then (b) keep good records of the consent.

Consent might be given when a customer signs up as a ‘preferred customer’ or some such similar program. But again, be clear, and keep good records of it. Records of consent (and any withdrawals of consent) should be maintained for four years under the TCPA.

And give customers a clear opportunity to opt out of phone and text solicitations. The presence of easy to use opt-out mechanisms demonstrates a good faith effort to comply with the law and the customer’s expectations.

Keep up with advice of counsel. TCPA law is constantly evolving. The FCC issues new regulations and interpretations of the law, and appellate courts have at times scrutinized some of the FCC rulings. What was a problem yesterday might be fine today, and vice versa?Counsel will be informed of these changes and can advise accordingly.

Milton Springut is a partner at Springut Law PC, New York. Reach him at ms@springutlaw.com. Mr. Springut's opinions are solely his.