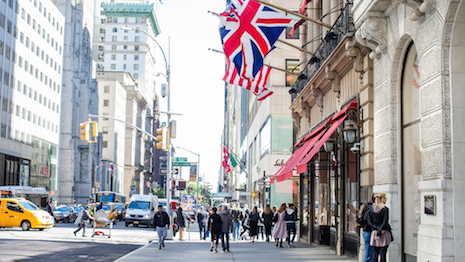 New York’s Fifth Avenue has been glorified in movies and in advertising, honored by visits from celebrities and bedazzled tourists. The main draw, as always, has been oversized, king-of-the-world flagships of luxury brands and specialty retailers, brawny buildings and Trump Tower, grand-dame hotels and to-die views of Central Park uptown, Madison Square Park in midtown and Union Square downtown.

Now, in an atmosphere of experience seeking and online-influenced retail, visitors – and residents – expect more from Fifth Avenue. Stiff competition for dining, shopping, entertaining, culture and living from New York’s trendy SoHo district downtown and the newly developed glittering enclave of Hudson Yards in midtown has spurred Fifth Avenue to rediscover the pack of its punch.

“Fifth Avenue is the authentic New York and its glamour is in a category of its own,” said Jerome Barth, president of the Fifth Avenue Business Improvement District, New York. “It is the place that one dreams about and that rewards all New Yorkers as they find their success.

“There is an emotional attachment to the avenue that is different than other places in town, or in other capitals,” he said.

In this exclusive roundtable, experts discuss new developments along the avenue from Union Square downtown all the way to Central Park. The transformation includes new properties such as 277 Fifth Avenue, more experiential emphasis in shopping and dining along a revitalizing cultural corridor, and newly affordable rents for commercial leases.

Jerome Barth, president, Fifth Avenue BID: Fifth Avenue is undergoing a transition that will bring it more in line with the tastes and expectations of a new generation of shoppers who are interested in a rich experience, encompassing shopping, dining and the enjoyment of quality public and private spaces.

Melissa Ziweslin, senior managing director, Corcoran Sunshine Marketing Group: The development of 277 Fifth Avenue, a dramatic, new 55-story condominium by notable architect Rafael Viñoly on a corner of Fifth Avenue is shifting the paradigm of what was considered luxury living on this significant thoroughfare.

While Uptown Fifth Avenue buyers are charmed by a view of Central Park and more traditional layouts, the more downtown-focused buyers of 277 Fifth Avenue enjoy views of the entire city from oversized, floor-to-ceiling windows.

Melissa Ziweslin, senior managing director, Corcoran Sunshine Marketing Group: Since The NoMad Hotel launched, this location has quickly evolved to become a destination for those seeking the quintessential character of New York, with the aura of downtown sophistication.

Fortunately, 277 Fifth Avenue is positioned at the center of the burgeoning NoMad neighborhood, known for the modern luxuries of boutique fitness studios, vibrant restaurants, and nearby green space.

What type of shoppers visit lower and midtown Fifth Avenue? Has the composition changed over the past decade?

Lon Rubackin, senior vice president, CBRE: Lower and Midtown Fifth Avenue have an eclectic mix of shoppers. Tourists for sure, but most fitness companies want to open their first Manhattan locations in this market because of the great mix of office workers and residents.

What about residential development? How is that changing?

Jerome Barth, president, Fifth Avenue BID: What we are seeing is the creation of new, very high-end residential development seeking to benefit from views of Central Park to the north and the Empire State Building to the south.

Some of this development is in place of former commercial space, although most of it is new.

The area is tremendously attractive to buyers who wish for the certainty of a neighborhood that is at the heart of New York’s identity and where values will only go one way: up.

Melissa Ziweslin, senior managing director, Corcoran Sunshine Marketing Group: New Yorkers place great value on the convenience of a neighborhood, and 277 Fifth Avenue's location at the cusp of downtown and midtown provides residents tremendous ease, and the best that the city has to offer at their fingertips.

With important landmarks like the Empire State Building, the Chrysler Building and the Flatiron Building only blocks away, the panoramic views from 277 Fifth Avenue are highly coveted.

Online and mobile shopping has cannibalized bricks-and-mortar retail. Has that affected Fifth Avenue?

Jerome Barth, president, Fifth Avenue BID: Retail is constantly being reinvented, and certainly all forms of electronic shopping are affecting stores and brands.

What we are seeing is that the brands that do best have control of their real estate either via direct ownership or via reasonable leases and are adapting their stores to the desires of their clients.

The new luxury store is also an experience that makes the visitor feel welcomed, engages a dialogue with art, activities and product, and invites them to take the brand home as part of their own story.

Lon Rubackin, senior vice president, CBRE: Bricks-and-mortar retailers who have embraced the Internet are doing extremely well and are the clear winners. It has only affected those retailers who haven’t evolved or invested in their brands.

What does Fifth Avenue compete with in New York? SoHo, Madison Avenue and now Hudson Yards come to mind.

Jerome Barth, president, Fifth Avenue BID: Fifth Avenue is the authentic New York and its glamour is in a category of its own. It is the place that one dreams about and that rewards all New Yorkers as they find their success.

There is an emotional attachment to the avenue that is different than other places in town, or in other capitals.

Melissa Ziweslin, senior managing director, Corcoran Sunshine Marketing Group: Fifth Avenue carries a world-renowned sense of cachet and exclusivity that is unlike any other Avenue in New York. 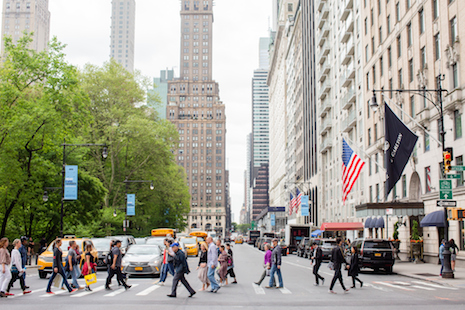 Company you keep: Central Park to the left, Fifth Avenue's Sherry-Netherland Hotel in the background and the Ritz-Carlton Hotel on Central Park South to the right. Image credit: Liz Ligon

Industry observers say experience is key to support bricks and mortar. What is the new experiential component of Fifth Avenue?

Jerome Barth, president, Fifth Avenue BID: Fifth Avenue has plans in that respect, which you will soon discover.

But for the moment what one must see is that Fifth Avenue isn’t just a shopping destination. It is the major cultural corridor of Manhattan.

The Museum of Modern Art, St. Patrick’s Cathedral or Central Park are key to the experience of enjoying a day on Fifth Avenue.

No other street or avenue in America has the prestige of Fifth Avenue. It will always be recognized worldwide as a place to be and to be seen.

Ground rents seem to be rising exponentially on Fifth Avenue. Isn't that going to be a disincentive, especially if Hudson Yards is offering attractive terms?

Jerome Barth, president, Fifth Avenue BID: Hudson Yards is hugely subsidized, both by the city and by Related, its developer.

Certainly, that creates a temporary instability in the market.

However, the trend on Fifth Avenue is not of rising rents.

Rents are more affordable now than in recent years and retailers are taking notice.

This is an excellent time to secure a great lease on Fifth Avenue.

Meanwhile, new luxury residential development 277 Fifth Avenue sits along one of New York City’s most iconic streets, Fifth Avenue, where it intersects with the most robust neighborhood in Manhattan: NoMad.

It’s a market with the coolest hotels such as the Ace and the NoMad, along with the soon-to-open Virgin Hotel.

It’s home to some of the most popular restaurants in the city and is a few minutes’ walk to Flatiron, Chelsea and Midtown.

Michael Kadosh, senior vice president, CBRE: The NoMad neighborhood along Fifth Avenue is anchored by the Empire State building to the north, and Eataly to the south.

277 Fifth Avenue is basically located in the center of it all. It’s a 10-minute ride from Grand Central – walking distance is about 20 minutes – [and] about the same from Lower Manhattan, making this location very desirable. 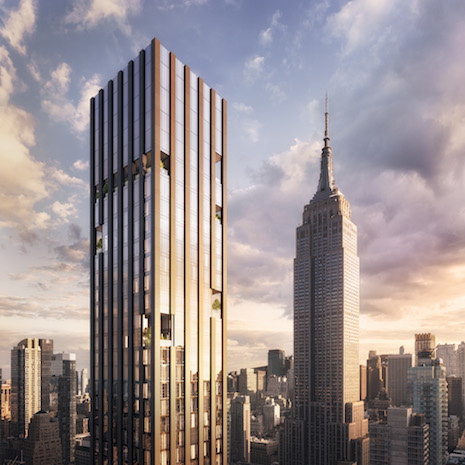 The majestic 277 Fifth Avenue complements the most famous manmade edifice in the world, the Empire State Building

The notion of a large flagship store – is it still relevant?

Jerome Barth, president, Fifth Avenue BID: Nike just opened a six-story flagship store at the corner of 52nd Street and Fifth Avenue. It is filled with customers who walk out carrying shopping bags all day long.

That store offers services and activities that you cannot get anywhere else.

A bit further up north, Tiffany & Co. is preparing a complete reinvention of their store that will further enhance their visitor’s experience and bring hospitality to a whole new level.

So, yes, the flagship is still relevant, if it is special and excites the customer and is part of a comprehensive brand approach that engages customers across multiple channels.

The store remains the one place where the brand can have a face-to-face conversation with the customer. That will not change.

Lon Rubackin, senior vice president, CBRE: Many brands are realizing bigger isn’t necessarily better, but being front and center in the consumer’s eye is essential.

The smart retailers are working hard to figure out the right size for their new flagships.

Fifth Avenue is one-of-a-kind because of many different elements. It has an exceptional perspective, with Central Park at one end and Rockefeller Center, St. Patrick’s Cathedral, the New York Public Library, the Empire State Building, Madison Square Park with the Flatiron building at the other end.

Nowhere else in the world is there such a rich group of meaningful buildings in such a setting.

In between them, you have gorgeous masonry façades, several art-deco buildings and perfect scales.

This, in turn, has led to Fifth Avenue being integral to American culture in film, song and print for over a century.

Melissa Ziweslin, senior managing director, Corcoran Sunshine Marketing Group: Manhattan’s Fifth Avenue has a long and storied history, throughout which it has undergone many changes and shifts in its residential and commercial offerings.

The avenue’s ability to evolve, yet remain authentic, sets it apart.