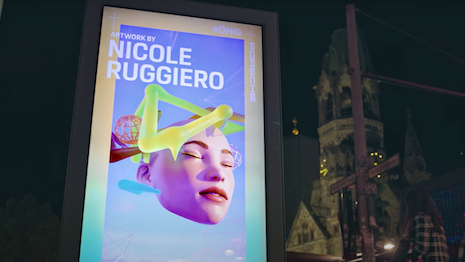 Nicole Ruggiero is one of 11 artists to have her work displayed in the global gallery. Image credit: Porsche

German automaker Porsche has teamed up with Berlin’s König Galerie art gallery to spotlight digital artists around the world in a celebration of creativity.

The pair have created a “Global Gallery,” showcasing the work of 11 artists in five major cities. In a new short film promoting the venture, Porsche executives, the founder of König Galerie and artists discuss the value in art exposure and following one’s dreams.

"This campaign is unique in that it highlights Porsche's core values of cutting-edge design, innovation and engineering without showcasing any of the brand's vehicles," said Julie Blackley, communications manager at iSeeCars, Boston.

"Instead, it turns the spotlight on digital artists and explains the emergence of digital art as a respected medium."

On a global stage
The short film opens with shots of the bustling atmospheres of disparate cities including New York and Tokyo. Marcel Nusser, marketing manager for Porsche, sits down for a chat with Johann König, founder of the König Galerie.

Mr. König explains how his gallery is constantly aiming to provide space to emerging artists. He also discusses how his organization has contemplated providing space for digital art.

From New York to Tokyo, Porsche is helping digital artists get their work out into the world

“Digital art was always a bit like the black sheep of the family or didn’t really have the attention it deserved,” Mr. König says in the video.

The vignette also features the 11 digital artists involved in the project, starting with Andy Picci.

As shots of Mr. Picci’s colorful, fantastical art permeate, he discusses how his work has historically been dismissed.

“I grew up confronting myself with people telling me that what I do is not art,” he says.

Following Mr. Picci is artist Auriea Harvey, who discusses her work with sculptures and the process of producing simulations and objects that bridge the gap between physical and virtual spaces. Her work is futuristic and awe-inspiring, and her passion for art is palpable in the film.

Porsche team members describe how art and innovation are, and always have been, at the heart of the automaker.

“Design and aesthetics have played a major role for our brand since the beginning,” Oliver Hoffmann, director of marketing communications at Porsche, says in the film.

After Mr. Nusser explains that a lot of these upcoming artists may not have the audiences that they deserve, the film shows snippets of the disparate artists’ works.

The collaboration is a celebration of art and artists who work to make their visions, and their dreams, come to life.

“We want to celebrate these people who pursue their dreams,” Mr. Nusser says. “Because a lot of people, they have dreams, but just a few of them really follow them.” 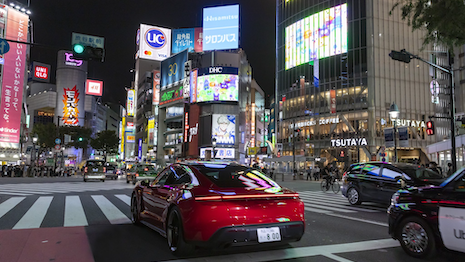 The project launched on Oct. 9, and will run through the first week of December.

Artistic adventures with Porsche
As reflected in the Global Gallery campaign with König, Porsche has had a longstanding appreciation for art. Throughout the year, the German automaker has released campaigns that go beyond straightforward advertisements and take a more artistic or entertaining approach.

In September, Porsche is presented one of its vehicles as the ultimate canvas in a new campaign starring acclaimed South African artist Nelson Makamo.

Earlier this month, Porsche and watersports brand Takuma partnered to celebrate the nature of sport and adventure through a cinematic campaign featuring professional surfer Matahi Drollet.

In a new short film, “Power of Silence,” the brands intensely juxtapose the power of a Porsche engine with the strength of the sea, ultimately capturing their shared desire for life’s thrills. Featuring the Taycan Cross Turismo, Porsche is leaning into its role as a leading luxury sport automaker, while highlighting an EV (see story).

"Porsche has always exemplified craftsmanship and brilliant design, and giving a stage to emerging artists in an emerging medium helps strengthen its position as a design innovator," Ms. Blackley said.

"Art is a universal language, so it seems natural for vehicles that are seen as works of art in their own right to embrace an artistic approach to their campaigns."