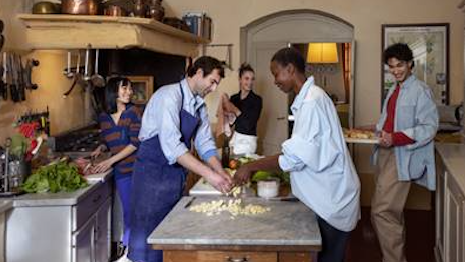 In a love letter to Italy, Tod’s explores contemporary life in its home country. Image courtesy of Tod’s

Italian fashion house Tod’s is celebrating its roots and the passion for quality and pleasure that make up Italian life.

From the love of cuisine and art to celebrating traditions and culture, the Aria d’Italia project tells the personal and professional stories of Italian artists, entrepreneurs and craftspeople through eight keywords: joy, pleasure, craftsmanship, timeless, boldness, passion, imagination and heritage. With the first two chapters already released, pleasure and timeless, the campaign will continue being unveiled chapter by chapter, or word by word, in a documentary series of videos and still images.

Aria d’Italia
In the first installment of the series, the brand focuses on pleasure through the eyes of Tuscan chef Marco Baldeschi and entrepreneurs Francesco Mondadori and Ludovica Bonini.

Tod’s travels to farmhouse and artist-residence Villa Lena in Tuscany, where Mr. Baldeschi serves as head chef after traveling and working internationally for many years.

“Cooking for others is just as much of an absolute pleasure as eating,” he says.

Traveling southeast of Tuscany, to Puglia, Mr. Mondadori and Ms. Bonini are featured in their farmhouse where they created their gourmet dogfood company, which combines their entrepreneurial spirit with Mediterranean food culture.

Pleasure is the first keyword in the series

“The sense of beauty, culture, hospitality and fine food — it is the art of conviviality,” Mr. Mondadori says in the video. “This is one of our founding pillars, as Italians.”

The second chapter observes the term timeless through the perspectives of Bianca Vanni Calvella Mantegna, Niccolò Rignano and Gemma Richards.

A student based in Sicily, Ms. Mantegna creates a project on organic farming to highlight the importance of safeguarding the environment.

Mr. Rignano and Ms. Richards are working to convert an abandoned villa in Piedmont into the “La Foleia” Hotel de Charme.

“We are the keepers of such a vast heritage that we are sometimes aware of,” Mr. Rignano says. “Most of the time, though, we are not fully conscious of its entity.”

Each installment includes a unique phrase to reflect the sentiments of its subjects. For instance, the first chapter said, “life is too short to not be Italian,” while the second episode’s phrase was “everyone is looking for beauty because beauty kills the flow of time.”

In September 2022, the words and pictures of the Aria d’Italia project will be pieced together in a book published in association with Rizzoli International.

Love for Italy
For years, Tod’s has placed a special emphasis on its homeland, and Italian culture has become a major part of its brand identity and messaging.

In a 2018 campaign titled, “Ciao by Tod’s,” the brand leaned into the carefree and breezy aesthetic of Italy with a digital video and social media posts showcasing the casual elegance of the word “ciao.”

Highlighting the lighthearted attitude that is unique to Italian culture, Tod’s recruited noted fashion figures such as Anwar Hadid, Lexi Boling and Grace Elizabeth to be the faces of the campaign (see story).

To promote its spring/summer 2022 collection earlier this year, Tod’s highlighted the idyllic and stylish world of Italy in the campaign, “Under the Italian Sun,” which followed jubilant models through the picturesque setting in their soft shades and chic looks.

The short film encapsulated the timeless and versatile style of the brand and the eternal enjoyment found in Italy (see story).