The #LovyFighters campaign features the stories of tastemakers and everyday women helped by Trussardi’s charity of choice, the Double Defense Onlus Foundation, to make more of an impact on the brand’s social community. Brands often align with women’s causes as the demographic makes up much of the consumer base.

"Trussardi's alignment with the Double Defense Onlus Foundation against gender violence allows them an opportunity to accelerate their philanthropic efforts as well as make a significant impact," said Dalia Strum, professor at the Fashion Institute of Technology and founder of Dalia Inc., New York.

"This initiative adds value to Trussardi as it displays the sensitive side of the brand," she said. "It emphasizes that they are not just a company but rather are deeply concerned about current issues and how they could help contribute. It personalizes their brand by offering their support to aid in this cause.

"By aligning the charitable campaign with the Lovy handbag, these bags could create a stronger appeal from potential buyers as a form of participation in regards to giving back. The potential consumer of one of these bags could even build a stronger alignment with the brand if their interests and ideals align with supporting the cause."

Ms. Strum is not affiliated with Trussardi, but agreed to comment as an industry expert. Trussardi was reached for comment.

Advocates in arms
Filmed by Chiara Battistini, Trussardi’s #LovyFighters shares personal stories of domestic violence survivors and includes testimonies from supporters, which have been shared on the brand’s social channels.

Influencers include notable Italian personalities to capture the attention of consumers. For example, Italian politician Giulia Bongiorno and actress and TV host Michelle Hunziker are featured in the #LovyFighters campaign.

In a statement for Trussardi’s #LovyFighters Ms. Bongiorno said, “The nicest part of this initiative is to see that the victims are finally out in the open, they had the strength, the courage to tell, even in one click, their history.”

The campaign also features Trussardi family members, Gaia, the brand’s creative director and granddaughter of its founder, and her brother Tomaso, Trussardi Group CEO and the husband of Ms. Hunziker.

Still imagery for #LovyFighters was captured by Julian Hargreaves.

On May 9 at Palazzo Trussardi in Milan, the brand opened a photo exhibition with the portrait collection by Mr. Hargreaves and a video installation curated by Ms. Battistini.

Each of the domestic violence survivors and supporters featured in the effort wears a Trussardi $69 tee with a red heart and outline of the brand’s greyhound dog motif at its center. The #LovyFighters hashtag is written in black at the top of the shirt. 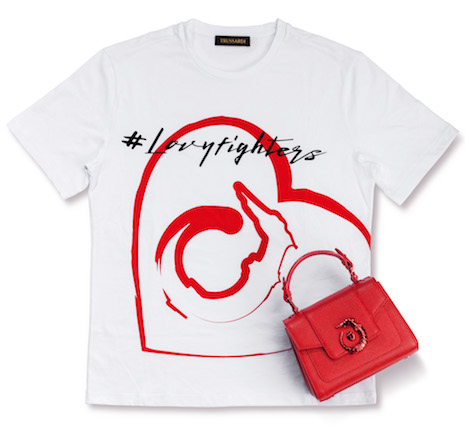 Proceeds of the #LovyFighters tee and the Lovy handbag style will benefit the Double Defense Foundation, an organization working to end violence against women.

Keep on fighting
The fashion sector supports women’s causes in a variety of ways, with luxury goods conglomerate Kering Group leading the way.

For example, Kering’s corporate foundation made a commitment to end sexual violence on college campuses in the United States with the launch of two partnerships in 2015.

At an award ceremony in New York, Kering awarded We End Violence with a $34,000 grant, and also announced its support of Generation Progress’ “It’s On Us” campaign. Championing women’s rights is a large focus of Kering’s corporate outreach in other parts of the world, and bringing the same approach to the U.S. will enable the group to make an impact to more individuals (see story).

But, as Kering and Trussardi’s #LovyFighters efforts demonstrate, women’s issues are not limited to female consumers.

Kering is vocal about its support of women’s rights and advocates often to end domestic violence. For this year’s White Ribbon for Women campaign, which in the past has featured well-known spokeswomen, Kering has invited prominent male figures to lend their voices to the cause (see story).

"[Trussardi's #LovyFighters] could create a stronger appeal for the initiative by incorporating influencers to increase awareness, especially if they align themselves with the brand value and mission," said FIT and Dalia, Inc.'s Ms Strum.

"Sentiments toward this strategy will allow their target market to sympathetically connect with the cause, which will make an impact on how they support Trussardi and the aligned influencers moving forward," she said. "This opportunity also allows Trussardi to build an emotional common bond with their clientele, by incorporating digital outlets.

"They are ideal opportunities to better display visuals as well as create a stronger conversation through their target market."