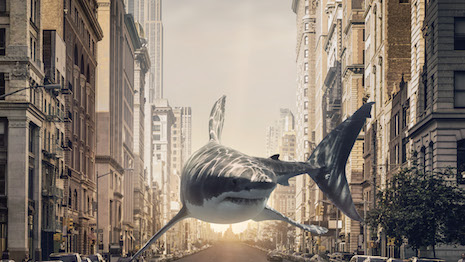 Swiss watchmaker Ulysse Nardin is encouraging consumers to swim against the tide in an advertising campaign featuring a literal fish out of water.

The brand’s #FreakMeOut campaign centers on the journey of a shark through the cities of New York and Shanghai, as it navigates the urban landscapes and forges its own path. Intended to represent Ulysse Nardin’s unending quest for innovation, the campaign also draws attention to the need to protect the world’s oceans.

"Ulysse Nardin being one of the most innovative Swiss manufactures with a tradition of precision and disruption, needed a campaign that was as daring as the pieces it crafts," said Jean Valentin, CEO of Paris-based agency Extreme, which created the campaign for Ulysse Nardin. "Because the world is standardized and luxury codes are globalized, as a creative agency, we believe in subverting trends, in going against the flow.

"The whole concept actually comes from a sentence we wrote once for a presentation about the brand 'You are beautiful creatures, we are unstoppable innovators, together we are the waves, we are the beautiful freaks,'" he said. "The #FreakMeOut concept is eye-opening, strange and almost unsettling."

Land shark
Ulysse Nardin’s heritage is tied to the sea. Founded in 1846, some of its earliest acclaim came for its marine chronometers.

Translating this dedication to the ocean to the present, #FreakMeOut stars a metropolitan shark swimming through the streets of Shanghai and New York. The eye-catching images show the fish hovering over asphalt, seemingly floating despite the lack of water around him.

One shot finds the creature on Fifth Avenue, surrounded by cars. In another, the shark is depicted over a river with New York’s skyline in the backdrop.

The fish is also seen following a herd of sharks down to a river from an aerial position. 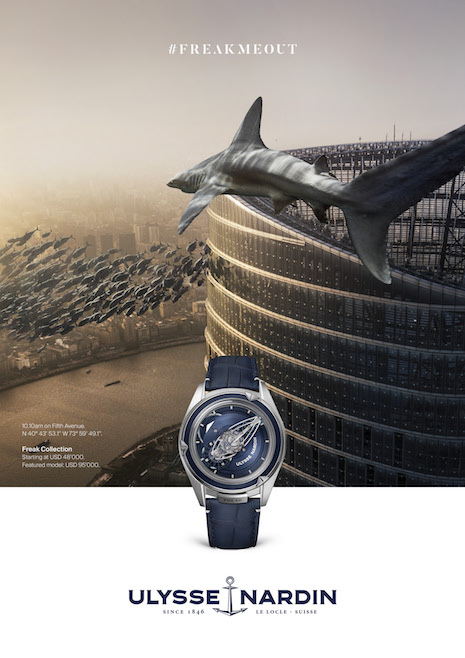 Per the brand, the shark represents the need for constant motion to survive. The “king of the ocean” is also a symbol of a creature that creates change rather than waiting for it to happen.

Ulysse Nardin’s promotion, developed by agency Extreme, centers on its Freak Out timepieces.

At this year’s Salon International de la Haute Horlogerie, the brand debuted the Freak Vision timepiece. It has now expanded the design into a collection of four watches.

The Freak Out collection eschews typical features of watches including dials, hands and crowns. These watches also use a “flying carousel” tourbillon with a baguette that rotates on its own axis.

All the game-changing #FreakOut oddities are in place #UlysseNardin #Freakmeout Learn more by clicking the link in the bio.

"Ulysse Nardin is a contemporary and disruptive manufacturer with products that are both quality and style driven," Mr. Valentin said. "The new campaign actually matches with a collection refresh for the brand.

"This new concept perfectly reflects the promise of the brand, the manufacture of freedom."

Along with being a call to adopt nontraditional watch designs, #FreakMeOut serves as an awareness campaign for the need for sustainability. Sharks are important to the oceanic ecosystem, making their continued survival crucial.

Marine heritage
Ulysse Nardin's relationship with the sea has manifested in other product creations.

The watchmaker previously branched out in a new direction with the release of a powerboat in collaboration with extreme-performance boat maker Midnight Express.

The brand unveiled the boat along with a special-edition, nautical timepiece to match. Citing its dual inspiration of the need to innovate and the majesty of the sea, Ulysse Nardin announced that it was excited to make this foray into a new field (see story).

Ulysse Nardin also celebrated the yachting and competitive sailing industry with the creation of a limited-edition timepiece commemorating the sailing competition that launched America’s Cup.

The timepieces reflect the unique design of the schooner sailing vessel, "America," the namesake of the America's Cup sailing competition. Ulysse Nardin is able to tout its own innovations in watchmaking by paralleling its timepieces to advancements in sailing technology (see story).

"Ulysse Nardin is a brand that is addressing a particular target: the free-minded game changers, innovators, pioneers and mavericks," Mr. Valentin said. "People who are ready to embark on an odyssey of their own.

"This is the type of person we hope will understand and catch the exploration and preservation opportunity that is offering Ulysse Nardin across its different campaigns and partnerships."