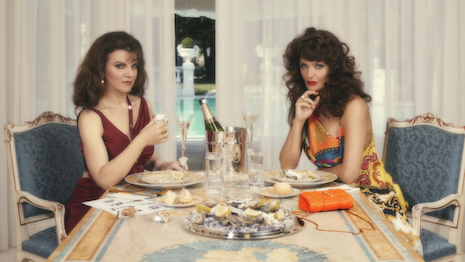 Versace's drama is based on vintage romance novels. Image courtesy of Versace

Italian fashion label Versace is paying homage to vintage romance novels in a holiday story that leads with drama and intrigue.

Versace tapped multimedia artist Sarah Baker to produce a branded six-chapter tale that begins with blackmail and escalates from there. Even though there are hints at traditional holiday themes, Versace's choice to think outside the box this season may help it stand out and make an impression.

"Lately, there has been an emphasis on storytelling in campaigns," said Lauren Bates, marketing manager and lead storyteller at Blue Moon Digital, Denver, CO. "Not necessarily on branded storytelling so much as creating a narrative that connects with an audience outside of an overtly branded campaign.

"Brands need to do more than to simply sell to a consumer, they need to entertain their audience," she said. "No one wants to be sold to anymore, they want to be informed or entertained.

"While inspired by romance novels, this campaign has a 'Dynasty' vibe to it – the drama, the mystery, the elegance, the intrigue. The storytelling through video, along with the written story, is more of a delightful escape.

"While dramatic, the videos and storyline are also fun. The viewer wants to know what comes next and is more likely to view all six chapters. By setting the story up like this and parsing out these short stories, the viewer is more likely to continue to engage with the brand. Thus, remaining top of mind for the holiday season."

Ms. Bates is not affiliated with Versace, but agreed to comment as an industry expert. Versace was reached for comment.

The issue, out in November, is dedicated to the Versace tale, which was penned and illustrated by Ms. Baker. At the start of the story, readers are introduced to protagonist Angelina Marina, who runs a record studio. Angelina, played by Ms. Baker, receives a threatening note that claims she did not write her hit single “Spritz Me with Your Love.”

Angelina was inspired to write the song while having an affair with Angelo, who has since died in a car crash. Thinking through her possible suspects, she believes Angelo’s widow The Baroness is behind the blackmail attempt.

However, after going to visit Baroness Ruby, played by Helena Christensen, Angelina realizes she was mistaken. Angelina’s one-time rival turns into her accomplice as they agree to work together to solve the mystery.

Through this choice, the narrative aims to move away from catfights and women who are pitted against each other, in favor of camaraderie.

“I am thrilled to partner with Sarah Baker on this exciting holiday saga," said Donatella Versace in a statement. "She’s a visionary and knows exactly how to represent the Versace woman. My designs empower, and this campaign fully represents that.”

The next chapter reveals that Baroness Ruby is hiding the fact that Angelo never died in the crash. After the accident, he was saved by a cowboy and taken back to a ranch.

Angelo lost his memory, until it was jogged by hearing “Spritz Me with Your Love.” He decides he wants royalties to the song, and plots to use Angelina’s daughter Cairo to get his revenge.

In addition to the print publication, the story is being told through Versace’s digital channels. Images and videos that accompany Ms. Baker's text show models in Versace ready-to-wear and accessories, and homes outfitted in Versace décor.

"This campaign is a light way of leading into the holiday shopping season," Ms. Bates said. "There isn’t the focus on the consumerism part of the holiday season.

"In the same breath, these short videos give the viewer ample product shots to inspire holiday looks and potential gifting ideas," she said. "But these elements aren’t in your face, they are subtle.

"The narrative calls out certain Versace pieces, but doesn’t make the short about those pieces. They are strategic product placements, similar to what you might find in a movie. It isn’t about the product, but it definitely doesn’t go unnoticed."

Other luxury brands have leveraged dramatic plots to get attention.

Italian fashion label Moschino took a stab at the soap opera genre in a recent campaign, congruent with its strategy to tackle various pop culture phenomena.

Based on the 1980s soap opera “Dynasty,” Moschino’s fall 2019 campaign had followers intrigued and amused by the stylistic film series. Presented through short snippets on Instagram, the label's campaign lined up a buzz-worthy cast of well-known names to show off the collection via an over-the-top motif (see story).

Others have used written text to engage shoppers during the holidays.

Italian fashion label Valentino celebrated freedom and art in a literary collaboration that embellishes its purses with prose.

In partnership with author Yrsa Daley-Ward, the brand launched a limited-edition series of Rockstud bags with lines of the writer’s poetry hidden inside. Timed for holiday gifting last year, the collection and corresponding marketing centered on love, speaking to the feelings of affection that run deep in many as they gather with friends, family and significant others (see story).

Versace is similarly using literature to create a connection, however in a more over-the-top, lighthearted manner than Valentino.

"Creating and producing something that is so overtly dramatic is a nod to a brand not taking themselves so seriously," Ms. Bates said. "When you can play with drama in this way, it adds intrigue instead of discourse. It entertains because it is so over-the-top. It isn’t a campaign that needs the viewer to imagine themselves in the campaign but rather it is a form of escapism.

"Things feel heavy – the political climate of many countries, the pressing need to get work done before holiday vacations, holiday shopping in general," she said. "These very real things can be daunting and stressful for consumers and Versace doesn’t want to remind them of that. This campaign allows viewers to step outside of their concerns and enjoy a story that has nothing to do with anything."