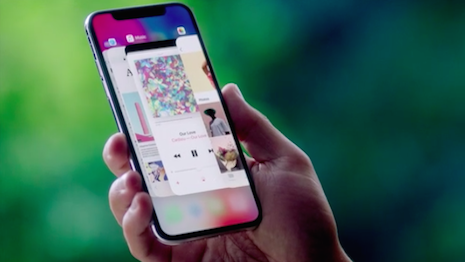 Apple is in a race to outshine in Google as a purveyor of augmented reality tools for brands. Image credit: Apple

While primarily known for its music-recognition service, Shazam also has a popular augmented reality platform for brands as part of its assets. In acquiring Shazam, Apple has acquired its AR platform as well, which fits with its larger embrace of augmented reality as a tool for brands with launch of the new iPhone 8 and iPhone X.

"Apple has the cash to buy and and build whatever it needs," said Paula Rosenblum, managing partner at RSR Research, Miami. "The philosophical question is, how can they use augmented reality to capture more people into the ecosystem?

"That’s why the Shazam deal is interesting."

With the launch of the iPhone X, it has become increasingly clear that Apple is transforming itself into a luxury company.

While its computers have always been expensive and high-end, the iPhone X marks the first definitive foray into creating a luxury mobile device for the California tech giant.

Along with that move comes the incentive for luxury brands to embrace the unique platform they have in the form of the iPhone, something that Apple is banking on as it rolls out new augmented reality tools for brands.

There are multiple benefits for Apple in acquiring Shazam. While Shazam has been struggling with its business model, its audio recognition software is enviable and comes with years of data built up on the way consumers interact with audio and how it can lead to conversions. 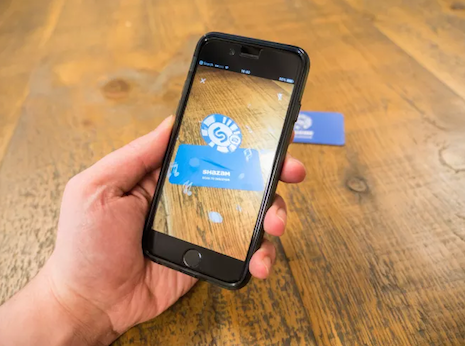 Additionally, Shazam’s AR toolkit is now in Apple’s hands, which will be a boon to the company as it works on its rumored AR headset, possibly to be unveiled in 2019.

Apple’s unveiling of its augmented reality ambitions as well as its acquisition of Shazam comes at a time when AR is gaining steam. Google, Apple’s competitor in many areas, also just launched an AR project called ARCore.

At Apple’s recent event unveiling the new line of iPhones, the company spent a significant amount of time talking about the new models’ emphasis on augmented reality as well as the ARKit to help developers create AR apps. Burberry is the first major luxury brand to make use of this new feature with a new application (see story).

In the next few years, the two companies will be competing over creating powerful augmented reality tools, which will give luxury brands an innovative new way of reaching their customers.

AR wars
Augmented reality has already been a game changer for some luxury brands.

By far, the sector that has already gotten the most from AR is beauty, with numerous brands introducing AR tools that help customers pick out new products.

The augmented reality feature previously allowed users to upload a still selfie to virtually try on various products that can be purchased from Sephora, but the new update allows users to view themselves moving in real time with the digital makeup, with more effective technology.

The update comes from the developer ModiFace after a survey of non-Modiface and non-Sephora apps showed that a 22 percent drop in conversion rates occurred when the virtual products did not line up or appear correctly on the user’s face (see story).

Brands are not the only ones to get in on the AR action. Retailers have also embraced it.

French department store chain Galeries Lafayette leveraged its foot traffic and added attention around the holiday season to promote an environmental cause. 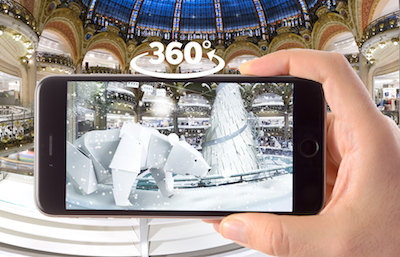 The retailer’s “Amazing Arctic Christmas” told the story of a family of polar bears who must venture away from the North Pole due to melting ice caps, with the bears finally finding respite in Galeries Lafayette’s flagship store on Boulevard Haussmann in Paris. Bringing the story to life in front of shoppers’ eyes, the retailer launched a mobile experience accessible in-store that used augmented reality to create an arctic environment indoors (see story).

Shazam’s AR platform is built mainly on allowing brands to add AR functions to a physical marketing material. For example, a print ad could be viewed through an AR lens to show 3D models of the products being advertised.

Now that Apple has acquired Shazam, it seems clear that the tech giant is on its way to making usable AR tools for brands a reality.