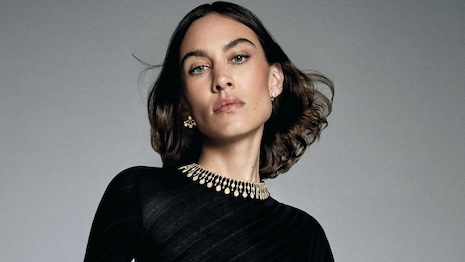 French jeweler Boucheron is putting its precious stones on full display in a new campaign.

With the help of fashion darling Alexa Chung, who makes an appearance amid a new set of campaign images out from the brand, Bucheron lifts Serpent Bohème, a collection that infuses rare jewels such as aquaprase and rhodolite into a uniquely-designed ensemble of accessories. The line embodies Maison Boucheron’s craft-focused ethos with free-spirited constructions and a level of savoir-faire that only a heritage brand could uphold.

Collection pricing is available upon request, according to Boucheron's site.

Ms. Chung appears in one of the images, stagnant and slow at first before a lens pulls back to reveal the model's upper half. Clothed in a black turtleneck, the ultimate canvas for an accessory of this magnitude, she looks to her left, revealing a sharp profile and letting the jewels speak for themselves.

Reflective of assertive femininity, a teardrop shape surrounds a set of diamond rings, earrings, necklaces and bracelets. More modern options include an asymmetrical ear cuff and a two-finger ring.

Boucheron's anchor collection dates back to the late 19th century and is based on a snake-shaped necklace made by Monsieur Frédéric Boucheron himself and gifted to his wife the omen, which was intended to protect her while he traveled.