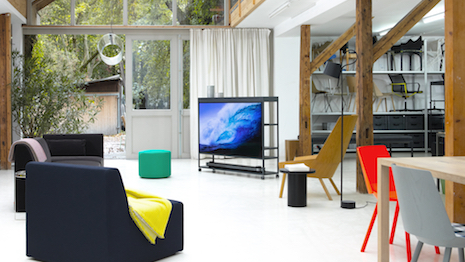 LG Signature is teaming up with interior designers, including Stefan Diez. Image courtesy of LG Signature

Appliance and electronics brand LG Signature is associating its products with a “metro classy lifestyle” through an influencer effort.

Through global partnerships with interior designers, architects and those in other design-related fields, LG Signature is looking to present its creations as part of a broader luxury home environment. In addition to touting the functional purposes of its products, LG Signature is also putting the focus on the technologies' designs.

"Dislodging market leaders like Sub-Zero and Miele requires a creative approach beyond the left brain," said Chris Ramey, president of The Home Trust, Palm Beach, FL. "Until now, everyone has failed.

"The issue is exacerbated by retailers that are rarely good executers of sophisticated innovative global strategies," he said. "In a world that is increasingly shrinking, leveraging sophisticated influencers throughout the world is a brilliant strategy.

"The partnerships are powerful and vividly executed. This campaign will have high-net-worth families and design professionals questioning their own preconceptions about kitchen appliance brands."

Mr. Ramey is not affiliated with LG Signature, but agreed to comment as an industry expert. LG Signature was reached for comment.

Form meets function
Launched in 2016, LG Signature has been focused on projecting an elevated status through partnerships.

For instance, LG Signature teamed with Bloomingdale’s for a window display that combined technology and fashion. The tech company’s home appliances were showcased in a series of rotating vignettes that aimed to present not only their function and innovation but also the devices’ design (see story).

More recently, LG Signature has sought to position its appliances within a luxury lifestyle by enlisting interior designers.

For instance, as Mr. Hicks mentions how “perfect” living alone used to be, his wife and dogs suddenly appear beside him. Extolling the benefits of countryside fresh air, he remarks that it is even better inside, as an LG Signature air purifier is shown.

LG Signature also worked with Harper’s Bazaar Arabia to take consumers inside the home of designer Khalid Shafar. He talks about how his own designs have a story and speaks about his experience incorporating LG Signature’s pieces into his work.

Rather than trying to hide appliances or devices, he says that he instead shows off their “sleek” looks.

Singapore-based architect Jason Pomeroy was featured in sponsored content from LG Signature on luxury lifestyle publication Prestige. He talks of his dedication to green design as he and his daughter use LG Signature’s washer and refrigerator.

"LG Signature is executing classic luxury marketing strategy, reinforcing their brand belongs in the upper echelon of the luxury appliance competitive set," Mr. Ramey said. "If leveraged properly and routinely refreshed, this strategy will define LG Signature for many years to come."

Close to home
Nearly half of affluent consumers in the United States feel that buying a luxury good is better than going on vacation, according to a report from LG Signature.

While 41 percent of respondents enjoyed the feeling of buying luxury, the purchase of home luxuries ranked higher when compared to experiential and personal luxuries. Increasingly, affluent consumers are boosting their spending on the home, with 55 percent of respondents saying they would rather spend on appliances and smart features than on travel (see story).

The series of short films brings some of the edgy aesthetics of highly-produced fashion campaigns and brings them to the world of home appliances. The campaign, which was created in collaboration with Los Angeles advertising firm Team One, is a part of Dacor’s larger bid to place its appliances as products that are just as luxurious and stylish as the latest designer clothes or accessories (see story).

"Appliances are not fashion because fashion is fleeting," The Home Trust's Mr. Ramey said.

"Function at high price points is a given. No brand has a competitive edge because they all work," he said. "What matters is whether the brand is ‘of their ilk’ and consistent with their own values.

"Like Steinway in the living room, the appliance brands often define the cook and owner of the home. This marketing credentials LG Signature with status equal to most any other appliance brand."