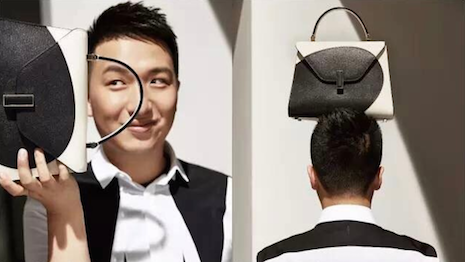 Luxury brands experimenting with WeChat's commerce model rose from 3 percent to 10 percent from the year-ago, suggesting that the sector is beginning to have better understanding of the Chinese commercial ecosystem.

L2’s Digital IQ Index China: Luxury 2017 report looked at different luxury brands and how they are performing in the Chinese market. What the report found was that familiarity with China’s unique digital platforms leads to better performance, particularly when engaging with Chinese influencers on social media.

"The most successful luxury brands in China have embraced ecommerce and are experimenting with new channels such as WeChat commerce," said Danielle Bailey, head of APAC research at L2, New York. "They have also responded to the rising popularity of livestreaming and short video platforms with celebrity campaigns that resonated with consumers and spiked both social engagement and search volume.

"Investments in the performance in their localized China sites with a heavy emphasis on mobile, which is crucial for the China market, have paid off," she said. "These brands also understand that serving Chinese consumers digitally extends beyond the mainland."

Chinese ecosystem
Every market in the world has its own idiosyncrasies that force businesses to adjust their strategies there, but few have the kinds of differences that China poses.

For one, China has its own set of digital platforms distinct from what most countries use. There is no Facebook, Google, Instagram or many other common digital destinations in China due to government regulation.

Instead, Chinese consumers rely on platforms such as WeChat, Tmall and JD to search for products, view and share social content and make online purchases. 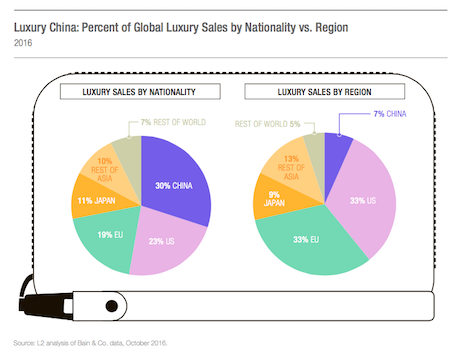 China is the largest luxury consumer base

The brands that do the most to embrace these platforms have the most success.

Currently, the most successful have been watches and jewelry brands such as Bulgari and Cartier as well as fashion house Christian Dior. These brands are among those that have launched their own direct-to-consumer ecommerce platforms in China.

Dior, for example, tried its hand at social selling by offering its followers on WeChat the opportunity to purchase a limited-edition handbag directly through a post.

The sale began April 8, 2016 and the atelier had expected to keep the limited-edition handbag sale posted through Thursday, Aug. 11, but by Tuesday, Aug. 9, only a day after posting the promotion, the handbags sold out (see story)

This can be partially attributed to Burberry’s embrace of Chinese social media platforms such as WeChat and its partnerships with prominent Chinese influencers such as Mr. Bags, with whom Burberry released an exclusive bag.

Mobile first
Another notable trend of the top performing luxury brands in China is an embrace of ecommerce. Online shopping is huge in China and even eclipses in-store purchases by some measurements.

Because of its reach, some ecommerce sites have become host to the kind of content that would normally appear on a brand’s personal site.

Instead of getting most of their brand interactions from social media, Chinese shoppers spend a lot of time on ecommerce platforms. The two most popular are Tmall and JD (see story). 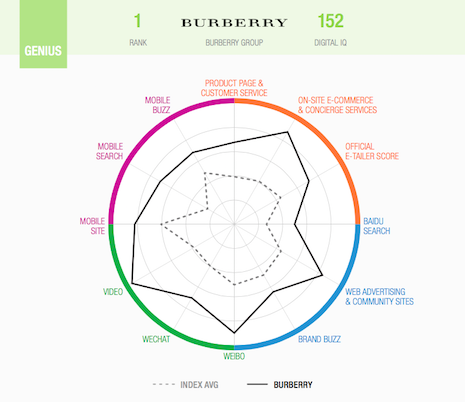 Burberry outperformed other brands in China by every metric

China also places heavy emphasis on mobile, with mobile far outweighing desktop as the channel of choice for engaging with brands, consuming media and making purchases. WeChat is a strong driver of this trend, with its emphasis on mobile payments helping to boost the mobile commerce sector.

WeChat’s social gifting and augmented reality coupons on Alibaba’s Alipay are a few of the tools consumers can leverage through mobile wallets that make the customer experience in China extremely advanced. Marketers should be prepared for this to be replicated throughout the world, as well as advancing beyond (see story).

Understanding how the Chinese market works is paramount to luxury brands as the overall spending from Chinese consumers outside of China grows more each year.

"As the China luxury market’s growth picks up again, but at a slower pace than the years before the anti-corruption campaign, a brand’s success in China hinges on its digital strength," said Liz Flora, editor of APAC research at L2. "A strong digital presence will enable brands to withstand market fluctuations.