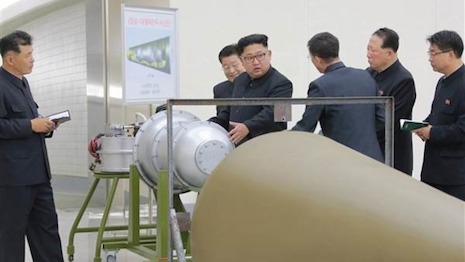 North Korean leader Kim Jong Un inspecting a bomb. The country Sunday, Sept. 3 detonated a nuclear device which it claimed was a hydrogen bomb. The underground explosion caused a 6.3 earthquake on the Richter scale in North Korea and in parts of neighboring China. Image source: North Korea Times

It is hard to judge if luxury marketers are discussing doomsday plans, but someone has to spell out the consequences of a war triggered by North Korea’s nuclear needling and the resulting tit-for-tat bellicosity.

Potential loss of life and dislocations of populations on a catastrophic scale – in South Korea, Japan, Guam, Hawaii and China, perhaps even mainland United States – is one scenario should the war of words escalate to nuclear weapons.The test of its sixth nuclear device Sunday, Sept. 3 which North Korea claims was a hydrogen bomb takes brinkmanship to its most dangerous level.

So what does that mean for the estimated $1.3 trillion luxury business worldwide?

Without seeming to be glib, a North Korea conflagration could devastate the luxury business.

High and dry
Demand from the South Korean market could evaporate. A similar situation would develop in Japan, where the rich flee to safe havens, curtailing their spending. Retail sales would collapse. Travel to Europe, U.S. and other international markets would dry up.

Further north and west, China could either join in the war or sit it out. Either ways, its affluent market will be spooked. The state will impose currency controls and domestic and international travel bans. Conspicuous consumption will be penalized. Retail sales would collapse. China as a driver of luxury demand will disappear.

If the United Kingdom, France, Germany, Italy and Japan side with the United States, then Western luxury brands associated with those markets will face Chinese ostracism and their stores possible vandalism. Their home markets might also be threatened with physical and cyber harm.

The damage will not be limited merely to dialed-back consumption of luxury products and services or dislocation in travel.

Taking stock
Most luxury wealth is stored in the stock market. Expect the major bourses in London, New York, Frankfurt, Paris, Tokyo, Hong Kong, Shanghai and Mumbai to drop to historic lows, wiping off tens of trillions of dollars in shareholder wealth. Trading might even be halted.

Cyber warfare might cripple IT networks, electric grids, air traffic control and the Internet, thus striking at the heart of knowledge-based economies.

A direct consequence of such vast destruction of economy and matériel is inflation, deflation, recession and depression in various markets. Property values will dive. Currencies will be devalued. Tax collection will decrease. Gold’s price will go up since that is the safe-harbor precious metal of choice when all other wealth-storage options seem less appealing.

That is just what comes to mind with a war emanating from the Korea peninsula. The scale of devastation could change drastically if China – or even Russia – throw their hat in the ring, not necessarily with the West. War might expand beyond Asia to Europe and North America’s shores. Add to that the terrorism-fueled Middle East and South Asia. The Third World War may have a marker.

THESE SCENARIOS are no longer fantasies. All the ingredients for an uncontrollable global combustion are present.

Can luxury brands and retailers do anything to prevent this situation spiraling out of control? No chance for that happening. But what they can do is come up with their own plans A, B and C in case the world of tomorrow looks nothing like today. Save blueprints for products and services, stockpile materials, ensure the safety of artisans and employees to earn their long-term loyalty. Most important of all, stay connected to the needs and desires of customers – the reason why luxury brands exist.