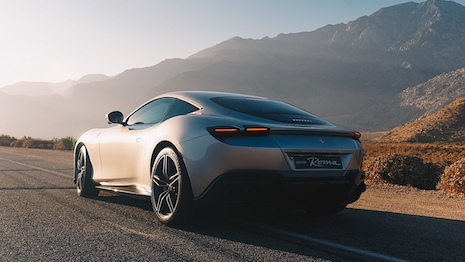 Italian automaker Ferrari is redefining “the good life” with the help of notable creatives who have found inspiration from the marque’s newest grand tourer.

Originally introduced in the late fall of 2019, the Ferrari Roma is intended to be more of an “everyday” sports car compared to some of the automaker’s more powerful performance vehicles. In an ongoing campaign, Ferrari has positioned the Roma as a pleasurable driving experience for daily life.

“Taking styling cues from multiple Ferraris of the past, Roma is considered by some to be one of the most attractive Ferraris in many years,” said Tyson Jominey, vice president for data and analytics at J.D. Power, Nashville. “With its long hood and graceful lines, this Ferrari is at home traveling backcountry roads but always retains the capability of dropping the proverbial hammer of acceleration.

“The only place one probably wouldn’t take this vehicle is to the track, but Ferrari has as many options for that as owners have empty spaces in their garage,” he said. “Just as the vehicle has a different focus for Ferrari, the campaign is different than a typical Ferrari spot.”

La Nuova Dolce Vita
The original launch film for the Ferrari Roma follows a man and woman as they each drive their own sports car in and around the Eternal City — turning heads wherever they drive.

Set to the soaring score of “La Mia Vita” with soft, romantic lighting, the vignette from Ferrari embodies classic Italian glamour. After a night of joyriding, the couple reunite at a vista overlooking Rome for the sunrise.

The Ferrari Roma debuted in 2019

The man hands the woman a brown leather book titled La Dolce Vita, which he purchased from a street vendor the evening prior. Inside the book, the woman adds a personal flourish and edits the title to read “La Nuova Dolce Vita,” or the new sweet life.

The book is a recurring theme in the Ferrari campaign, which shares how friends of the brand embody “La Nuova Dolce Vita.”

In the first chapter, world-famous chef Massimo Bottura shares his early experiences in the kitchen and how he defines the pleasure of a good life. The short is set in Modena, Italy, Mr. Bottura’s hometown and the birthplace of Ferrari.

At the close of the film, Mr. Bottura signs a leather-bound copy of the La Nuova Dolce Vita with a note that reads: “Modena, slow food and fast cars.” 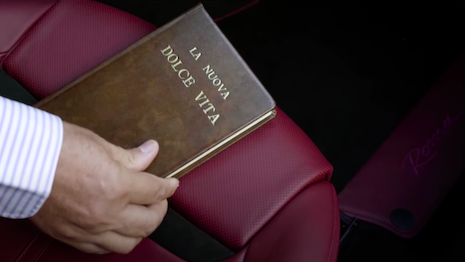 The leather-bound book is a recurring motif in the campaign. Image credit: Ferrari

The second chapter is set in Basel, Switzerland and follows German chef Peter Knogl. He discusses the pleasure he finds in gourmet cuisine as well as architecture, and is seen holding his own copy of the La Nuova Dolce Vita.

Next, Ferrari travels to Japan. Actor and director Takayuki Yamada shares how the two different aspects of Japanese culture achieve harmony in the modern metropolis of Tokyo and the more spiritual city of Kyoto.

Actor Hans Zhang presents a more elegant interpretation of the good life in Shanghai. His chapter has no narration, allowing dramatic shots and a refined instrumental orchestration to set the tone.

Continuing the tradition of the campaign, both actors leave their own mark on copies of La Nuova Dolce Vita.

The most recent chapter brings Ferrari to California, the home of brand ambassador and Maroon 5 frontman Adam Levine. He and his wife, supermodel Behati Prinsloo, spend an evening driving the Ferrari Roma in Los Angeles and the nearby desert.

In the final act, they arrive at a casual party. In a scene reminiscent of the first film, all the guests stop to admire the Roma and the couple pass along their copy of La Nuova Dolce Vita to the host.

The automaker has previously partnered with Mr. Levine and Ms. Prinsloo for a charitable endeavor featuring the Roma. The couple had helped promote the October auction of a sleek white Ferrari Roma to benefit Save the Children (see story).

“Ferrari is very selective over who they choose to represent their brand,” said Julie Blackley, communications manager at iSeeCars, Boston. “Adam Levine and Behati Prinsloo embody sophistication and luxury.”

Stylish heritage
Ferrari, one of luxury’s strongest brands, rarely embraces storytelling to this extent in its marketing efforts. However, the change in approach reflects the Roma’s unique positioning in the Ferrari lineup.

“Ferrari Roma is one of the middle children in Ferrari’s expanding lineup, but more appropriately it’s the entry level grand touring coupe,” Mr. Jominy said. “Roma owners will experience massive levels of performance and handling that surpass nearly every other car on the road, but the real draw here is the style.”

The Roma was one of the grand tourers featured in a museum exhibition by the automaker earlier this year.

“Ferrari draws more on its racing heritage than anyone in its design, in its sound and in the impact the vehicle creates,” J.D. Power’s Mr. Jominy said. 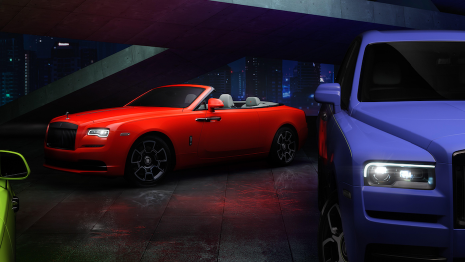 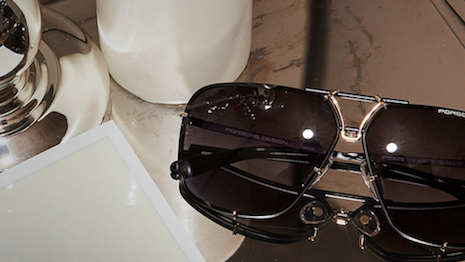 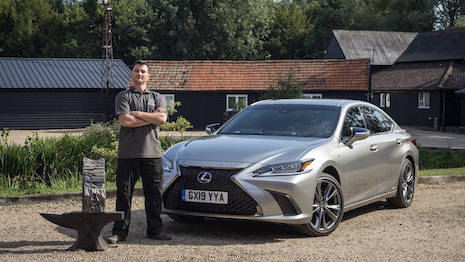