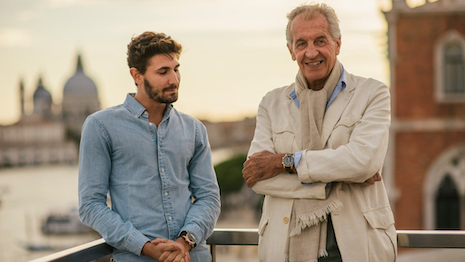 Swiss watchmaker Longines is marking the debut of a bronze version of its classic Legend Diver watch with a classy short filmed in Venice.

The new bronze Legend Diver, which was last released as an original in 2007, is showcased in all its glory in new footage narrated by Italian collectors John Goldberger and Alessandro F. The re-release of the watch is part of an effort by Longines to dust off its collection by remastering certain pieces.

“The short reinforces the brand’s place as a ‘tool watch,’ and that’s a niche Longines wants to own,” said Chris Ramey, founder of Home Trust International, Palm Beach, Florida. “The footage leverages its traditional pillars including heritage, sophistication, a rich narrative and the highest standards of quality.”

Rooted to the original
What is distinctive about the new version of this classic, with retails for $3,000, is its bronze case, Arabic numbers and dark green dial. The watch is water resistant for up to 300 meters and is paired with a brown leather strap finished with beige topstitching, which can be swapped out for a green nylon strap. 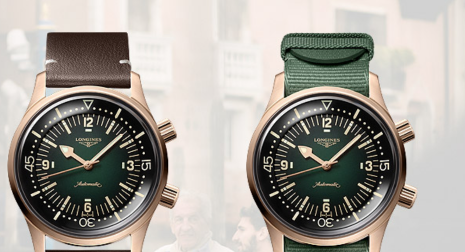 The bronze Legend Diver is water resistant for up to 300 meters. Image credit: Longines

Part of Longines’ Heritage collection of remastered watches, the brand’s repertoire also includes the Lindbergh Hour Angle Watch, a re-issue of the timepiece developed for the American pilot Charles Lindbergh in 1931, as well as the Longines Twenty-Four Hours, a second edition of a watch designed for Swissair pilots in the 1950s.

Together with fellow collector Alessandro, who declines to divulge his surname, Mr. Goldberger sets himself up as an apostle of the Longines brand and gives the audience a history lesson in the short, which lasts less than 2 minutes.

The footage opens in Venice with Mr. Goldberger, who has a bronze Legend Diver on his wrist, drinking a shot of espresso while espousing the benefits of watch collecting.

With shots of gondolas and St. Marks in the background, the pair cruise around Venice in a brown motorboat as they deliver their explainer of the bronze Legend Diver’s history.

“Collecting watches is a work of passion and dedication done with discipline,” Mr. Goldberger says in Italian. “I love the look, the feel, the complexity of a watch.”

In business for over 185 years, Longines is a brand that has always piqued Mr. Goldberger’s interest due to its importance in the development of the wristwatch in the first half of the last century.

Mr. Goldberger describes the bronze diver as a tool watch — one that performs a useful function other than telling time — which first was introduced in the 1950s during the race for the most waterproof timepiece. One of the most interesting characteristics is its Super Compressor case with 2 crowns and a bi-directional bezel mounted inside to monitor time under water.

The bronze version’s proportions have not changed from those of the original, which was first introduced in the early sixties. However, the bronze case will allow for a unique aging process as the metal weathers.

On the list of its improvements from the original are a new movement produced for Longines with a silicon balance-spring, which reduces the problem of magnetism and makes the watch more versatile, according to Mr. Goldberger.

Alessandro lauds the watch for its attention to detail, from the diver engraved on its titanium case back to its winged hourglass.

“In my journey as a collector, I am increasingly fascinated by less conventional things,” he says. “The more I continue along this journey, the more I discover that Longines archives are full of hidden gems.”

History of innovation is long
As pointed out in the film, Longines’ history is a storied one. Part of the Swatch group, the brand is working to establish itself as collectable.

“The video is centered on how the brand has a lot of hidden gems and really is a collector’s item, which is a nod to the fact that Longines may be overlooked by a lot of people and they are trying to become top of mind,” said Donnie Pacheco, head of Donnie P. Consulting, Seattle.

Last year, Longines manufactured its 50 millionth timepiece and celebrated 185 years in the industry. The brand maintains that precision and quality have been the pillars of its business since its birth (see story).

The Conquest V.H.P. GMT Flash Setting allows wearers to change time zones either manually or with a smartphone, making it an appealing choice for affluent consumers who spend long amounts of time traveling (see story).

Longines is ambitious in its drive to innovate to distinguish itself in a crowded market and bolster its image.

“Longines is an important part of Swatch group and has a storied history of watchmaking, but they are not a top of mind brand like a Rolex or a Patek,” Mr. Pacheco said. “They are positioned differently and are in a more crowded part of the market, so they play up their heritage, contributions and collectability.”